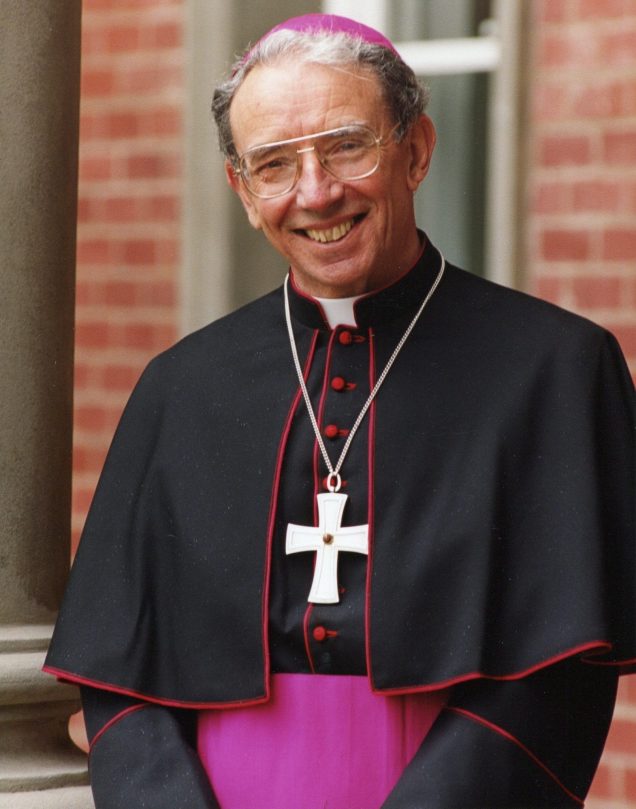 Archbishop Adrian Leo Doyle was born in Hobart. A priest of the Archdiocese of Hobart he was ordained coadjutor to Archbishop D’Arcy in 1998 and succeeded to the See in 1999. Archbishop Doyle retired in 2013 and is succeeded by Archbishop Julian Porteous.

“We need to stay on the road to Emmaus, to face up to our doubts, to talk them over with others, and to offer each other our companionship and support.”

Archbishop Adrian Doyle was the first Tasmanian-born Archbishop of Hobart. Educated locally in three of Hobart’s Catholic schools, Archbishop Doyle studied for the priesthood at Corpus Christi College in Werribee and the Collegio Propaganda Fide in Rome before being ordained a priest on December 21 1961 for the Archdiocese of Hobart. He returned to Tasmania in 1965 having completed his Doctorate in Canon Law at the Gregorian University in Rome.

Drawing on his expertise in Canon Law, Archbishop Doyle held a number of important posts prior to becoming Archbishop. He was responsible for the Marriage Tribunal between 1966 and 1998, including acting as a Judge on the National Appeal Tribunal. From 1991 to 1994 he was President of the Canon Law Society of Australia and New Zealand. He was Dean of southern Tasmania (1982-1989) and consecutively Chancellor (1988-1996) and Vicar General (1996-1998) of the Archdiocese of Hobart, before being appointed coadjutor Archbishop in 1998, and succeeding as Archbishop in 1999.

His early studies in Rome left Archbishop Doyle with an ear for the Italian language. He was appointed chaplain to the Italian Community in 1973, maintaining that role until his episcopal installation. He remains close to the Italian Community. He served as an assistant priest at Invermay, Bellerive, and St Mary’s Cathedral, and parish priest of Sandy Bay. This pastoral experience served him well as the Archdiocesan Director of the Renew Programme from 1990 to 1992. As Archbishop, he took special interest in encouraging and accompanying young people to attend World Youth Days in Toronto, Cologne, Sydney, and Madrid.