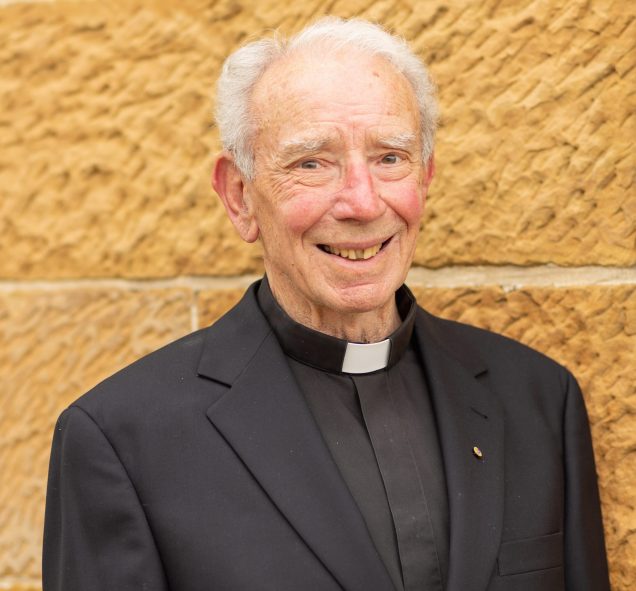 It is 60 years since Emeritus Archbishop of Hobart, Adrian Leo Doyle, was ordained to the priesthood in Rome on 20 December 1961, on the cusp of the Second Vatican Council.

The first Tasmanian Catholic priest to be made a bishop, he served as Archbishop of Hobart from 1999 to 2013.

Looking back over his time as a priest, the now 85-year-old Archbishop has seen many changes in the Church since entering the priesthood.

Raised in a strong Catholic family, he knew by the time he was in his final year of high school at St Virgil’s College in Hobart, that he should seriously consider the priesthood.

“It was probably around October of my last year at school that it just seemed to solidify, that I should give it some careful attention,” Archbishop Adrian told the Catholic Standard.

He completed the last five years of his seminary formation in Rome and was at St Peter’s Basilica on the day Pope St John XXIII made the announcement that a Vatican council would be held.

By the time he was ordained in 1961, preparations were well underway for the Council which commenced in October 1962. Archbishop Adrian witnessed many rapid changes in the Church following the conclusion of the Council in December 1965, including the change in the form of the Mass.

“Even I had to make some adjustments as all the teaching and the preparation that I had received had been going forward before ever there was talk of a Vatican council,” he said.

After completing a Doctorate in Canon Law, he returned to Tasmania in 1965 and served in several parishes including Invermay, Bellerive, St Mary’s Cathedral Hobart, and Sandy Bay/Taroona. He also put his Canon Law studies to use, having responsibility for the Marriage Tribunal for more than 30 years.

Archbishop Guilford Young was inspirational, he said, in assisting priests understand the vision of Vatican II.

“He was most enthusiastic, which was part of his personality. He imparted this new vision of the liturgy which was the whole people of God worshipping together.”

He also recalls meeting Pope St John Paul II in 1986 during the pontiff’s visit to Hobart.

“He was a very remarkable man. He’d been through an awful experience of communism in his country, and I think he saw himself destined to really take up the fight.”

The decision of his superiors to elevate him to the episcopate didn’t take the young Fr Adrian entirely by surprise.

“The situation was that there had never been a Tasmanian priest made a bishop. I think that was because Tasmania is small and until more recent times it was necessary for somebody already a bishop to come from elsewhere and take over.”

He was ordained a bishop on 6 February 1998, taking as his motto “Fidelity and love”. The following year, in August 1999, he was installed as the 10th Archbishop of Hobart following the resignation of Archbishop Eric D’Arcy, whom he described as “a very special man”.

“He was the most courteous man you would ever want to meet. A scholar and an intellectual. He was very articulate and had a powerful personality and a wonderful memory. He made a really big impression on the Church and on Tasmanian society.”

Archbishop Adrian led the Church in Tasmania through a difficult period in the early 2000’s as cases of clergy sexual abuse came to light.

“You go through a state of shock really,” he said.

“Nothing can compare with the long -term suffering of the victims, nor can we underestimate their courage in speaking up.”

“It required a response on behalf of the Church and in specific terms by the Archbishop. He needed to learn that a response should be quick, appropriate, compassionate, caring for the victim and also for the parish communities left without their priest.”

As Chairman of Caritas Australia from 2003 to 2012, Archbishop Adrian travelled to Samoa, South Korea, Bangladesh, Cambodia, East Timor, and Indonesia.

In 2009 he was made a Member of the Order of Australia, in recognition of his service to the Catholic Church in Australia and to the community, as Archbishop of Hobart, and through his role with Caritas, supporting international aid to developing countries.

After 14 years leading the Church in Tasmania, he retired as Archbishop of Hobart in 2013.

“Transition to retirement is a huge step, after so many years of involvement in the life of the Church, but it has to happen sooner or later,” he said.

“For so much of our lives the focus is on what we do, to make us who we are, but that all has to change.

“In retirement there is a chance to reflect on who we are as loved by God, contented to live a life which is at peace with what we have done, the mistakes we have made, and the opportunities which we have in retirement for more reflection, more prayer, and a greater focus on thankfulness for the opportunities given during the earlier years.”

Archbishop Adrian is enjoying having more time for prayer and contemplation of the Scriptures, and after 60 years of priesthood finds his relationship with the Catholic community in Tasmania “comforting”.

“I get the distinct impression people are very pleased to see me. They know that I know them, that I remember them. I suppose I have a pretty good memory really.”

He also feels a sense of gratitude for his time serving the Church as a priest.

“I am most grateful that I have reached this point, 60 years a priest, and still in good health and able to live a reasonably active life. It is a case now of living each day, in a quiet and peaceful manner, supported by family and friends.”

“I continue to make my own the refrain: ‘Lord, I thank you for your faithfulness and love’.”