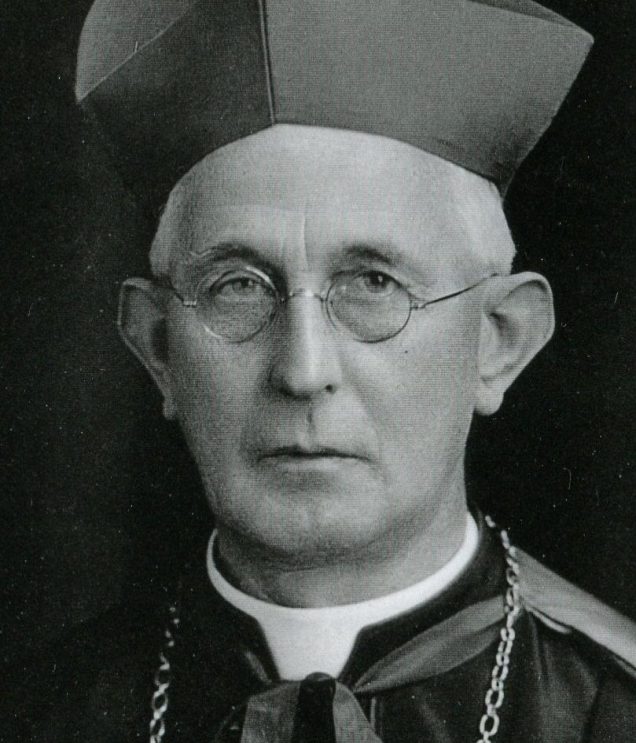 Motto: IN OMNIBUS CARITAS (In all things, charity)

Bishop of Wilcannia-Forbes before becoming Archbishop of Hobart, William Hayden was the last of Tasmania’s Irish-born Catholic Archbishops. He gained a reputation in his former diocese as “the travelling Bishop” and that characterisation also rang true of his early time in Tasmania. He clearly enjoyed being a pilgrim pastor.

“Tasmania is a beautiful place,” Archbishop Hayden told a reporter for The Examiner in 1932.

“Just look at that view. Nowhere else in the world have I seen such glory reflected in the hills nor anything that could rival that scene for beauty.”

In 1931 Archbishop Hayden travelled to Rome and Ireland, and in 1934 he attended the National Eucharistic Congress in Melbourne, where he presided at one of the major Masses. These standout travels aside, ill-health meant that Archbishop Hayden’s travels and activity diminished. But the six years of his Archiepiscopate are marked by many meetings with the people of the Archdiocese. In addition to this, Archbishop Hayden spoke to Tasmanians over the airwaves. In 1931 he prefaced the Pope’s first wireless global broadcast by giving an address from a local radio studio.

Installed during the early stages of the Great Depression, Archbishop Hayden maintained his long association with the welfare activities of the St Vincent de Paul Society and other lay societies. His episcopal motto focused on charity, and he clearly saw charity as Catholicism’s greatest evangelical tool.

“Be ever true to your Religion,” he told a group of former St Mary’s College students in 1930, “and let your good works shine before the world that you strengthen one another; and by your example lead others into the true faith of our Holy Mother the Church.”

Illustrating this himself, Archbishop Hayden showed great concern for the orphanages under his care, even in death.

“I do not mind where I am buried,” Archbishop Hayden wrote, “but I ask the people to raise a humble monument over my grave with a simple inscription.” Having thus declined an elaborate memorial, he bequeathed money to establish an orphanage in northern Tasmania.