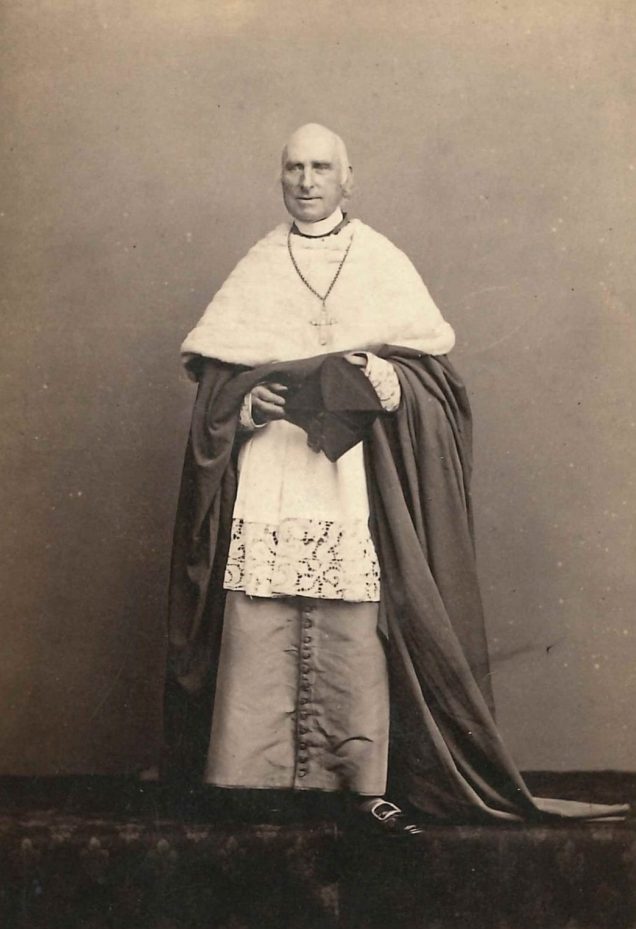 Bishop Willson was born in Lincoln, England. He became the first bishop of Hobart in 1842. He retired in 1865 and returned to England, where he died in 1866. Bishop Willson was buried in Nottingham, but his remains have since been transferred to Hobart and interred in the St Mary’s Cathedral crypt.

“May the zeal, which induced our forefathers in our native land, to erect temples in which should be proclaimed the glory of God, encourage you to imitate their holy example in this distant region of the earth!”

Robert William Willson, a priest of Nottingham, England, was made the first bishop of Hobart in 1842. He arrived in 1844, laid the foundation stone for St Mary’s Cathedral in 1860, and in 1865 retired to England, where he died the following year.

During his episcopate Bishop Willson was an internationally prominent advocate for the better treatment of convicts and the mentally unwell. He made representations to colonial authorities about the conditions in which convicts were housed, the nature and extent of their punishments, and the limitations imposed on their free practice of religion. In 1847, having travelled to Britain, he gave evidence to a Parliamentary Select Committee investigating the convict system.

“I think that Transportation is a terrible Mode of Punishment,” he informed the committee.

Bishop Willson’s observations helped bring about changes in the treatment of prisoners, the closing of the Norfolk Island penal settlement, and contributed to a wider turn against the use of transportation within the empire. Similarly, his advocacy for the mentally ill led to more careful institutional arrangements in the New Norfolk Asylum in Tasmania and his advice on this matter was also sought by the colonial government of Victoria.

As Hobart’s founding bishop, Bishop Willson was active in the provision of church structures. He commenced the organisation of a system of parishes and was a great sponsor of church-building, including early stone churches like Bothwell, Campbell Town, Dover, Glenorchy (since demolished), Jerusalem (now Colebrook), Oatlands, Sorell, and Triabunna. He facilitated the foundation of St Mary’s Cathedral, and during his episcopate a number of smaller country churches were also built, including those at Cullenswood, Deloraine, Emu Bay (now Burnie), Evandale, Franklin, Geeveston, Hamilton, Karoola, Kempton, Snug, Stanley, and Westbury.

Under Bishop Willson’s leadership, Tasmania became a colonial leader in the gothic revival movement. This was expressed in the provision of furnishings, vestments, chalices and so on, as well as the building of churches. Much of this neo-gothic patrimony was designed and gifted by Bishop Willson’s friend, the famous gothic revival architect Augustus Welby Northmore Pugin. Connecting with this, Bishop Willson sponsored local craftsmanship and architectural talent. William Wardell provided designs for St Mary’s Cathedral, for instance, and Bishop Willson enjoyed a close working relationship with the notable local architect Henry Hunter who designed and oversaw the construction of a range of Church-owned buildings.

Bishop Willson was a deeply pastoral man. He invited the Sisters of Charity to Tasmania to help provide a Catholic education to Catholic children. He opened St Joseph’s School and established a minor seminary as well. When he first arrived in the island there were four priests, but when he signed a letter of congratulation to Cardinal John Henry Newman in 1864, the year before his final departure for England, nineteen Tasmanian priests co-signed it.

Bishop Willson constantly reminded his people that the Church’s liturgies and buildings were not ends in themselves, but the means of bringing about something greater. “Rely upon it,” he said, “that man’s religion is vain who omits it in practice.”