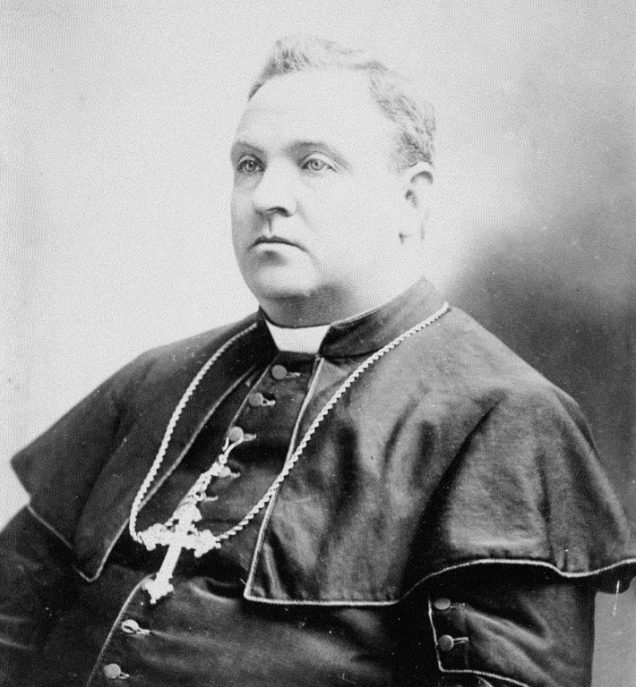 Born in Tonacar, Co. Galway, Ireland, in 1853, Archbishop Patrick Delany was appointed coadjutor Bishop of Hobart in 1893. He succeeded Archbishop Daniel Murphy in 1907 and died in Hobart in 1923.

Motto: DUC IN ALTUM (Cast into the deep)

“No matter how soon hostilities may cease, their effects will long continue to be felt.”

A multilingual scholar awarded a doctorate in divinity by Pope Leo XIII in 1887, Archbishop Patrick Delaney was appointed coadjutor to Archbishop Murphy in 1893 and succeed to the see in 1907. His lengthy service as coadjutor involved much domestic travel undertaking pastoral duties like the conferring of the Sacrament of Confirmation, and his episcopate was marked by momentous events abroad, most notably the First World War.

Archbishop Delany became a proud advocate of Tasmanian development. “I miss no opportunity wherever I find myself of putting the exceptional advantages of Tasmania before those I meet,” he wrote while travelling in Britain in 1908. An advocate for more immigration and closer settlement of the land, he spoke affectionately and knowingly of ordinary Tasmanian life. In one interview in Ireland he answered a reporter’s questions with details about crops grown and tonnages shipped, and spoke of the geology and minerals of Mathinna and Mount Bischoff and Queenstown. “Few ecclesiastics are as well informed as Dr Delany”, quipped the editor of the All Hallows Annual. “He reads the best works in the original, keeps in touch with the best periodicals; and during his recent European travels exchanged views with the Catholic bodies in different countries, took part in a German Congress at Dusseldorf, and presided at a working-men’s reunion at Paris.”

From humble beginnings, Archbishop Delany was evidently scholarly while remaining grounded. Having experienced the transformative effect of educational opportunity, he sought to continue to grow Tasmania’s apparatus of Catholic schooling, most prominently through the founding of St Virgil’s College in Hobart and St Patrick’s College in Launceston. Yet he was also a great supporter of ecumenical fraternity, seeking combined Christian cooperation in the development of Australian society. “We have so much to do that we have no time to quarrel amongst ourselves,” he once said, before calling on all Australians to “push on unitedly”.

Even when war came, Archbishop Delany spoke more of unity than victory. During the First World War he encouraged prayers for peace, and sought to get his people imagining what that peace might look like. In his Pastoral for Lent in 1915 he wrote that “God’s mercy is surely needed now to stay the arm of the destroyer and to inspire mankind with thoughts of fraternal charity once more; for without some measure of charity diffused amongst mankind there is scant hope of even a tolerable tranquillity.”