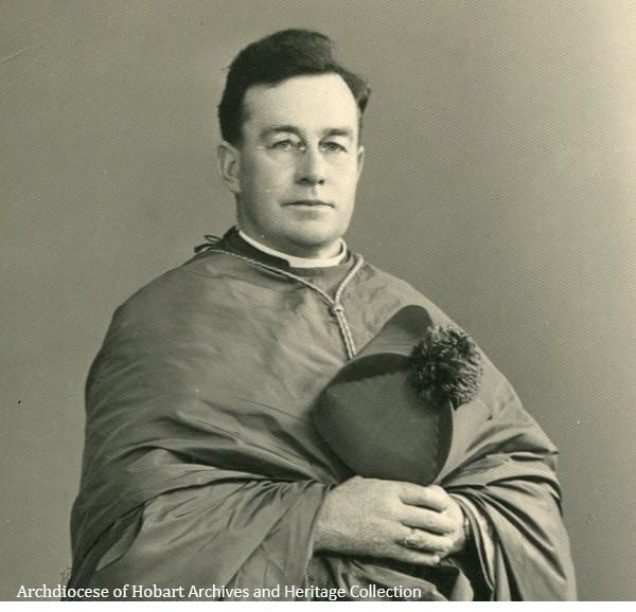 Archbishop Justin Daniel Simonds was born in Glen Innes, New South Wales. He was president of St Columba’s Seminary in Springwood prior to being elected Archbishop of Hobart after the death of Archbishop William Hayden. He was transferred to Melbourne as Coadjutor in 1963 and succeeded Archbishop Daniel Mannix in 1963. He died in November 1967, only a few months into his retirement.

“The Church is not an organisation but an organism, a living Body of which the very life is Christ Himself.”

Archbishop Justin Daniel Simonds was Australia’s first Australian-born Archbishop. Highly educated, he was an alumnus of Louvain University, and formerly President of St Columba’s Seminary in Springwood. He held a Doctorate of Divinity and a Doctorate of Philosophy.

Upon arriving in Tasmania, Archbishop Simonds especially sought to promote greater awareness of current Catholic teaching. Some of his Sunday homilies were broadcast on national radio, for instance. Hoping to foster an intellectually robust Catholic community, he actively supported organisations like Tasmania’s Newman Society. Through this, he courted some controversy, like when he publically criticised reportedly anti-Catholic teaching by a Professor of English at the University of Tasmania. Archbishop Simonds pointed out that such unchecked bias “must give the general public a very poor impression of the standard of culture within that institution”.

But while ardently defending Church teaching Archbishop Simonds was sensitive to the social realities underlying the trends of his era. “Society has gradually become subservient to industry and the machine,” he pointed out. He also recognised that the Church had played its part in allowing that state of affairs to develop, pointing out that “we, who have the heritage of the Faith … have lost somehow our enthusiasm for the building of the City of God. We must capture once more the vision which animated our forefathers, and enter with new zest into the great adventure of reconstructing our social order by restoring all things in Christ.”

As one of the leading intellectuals of the Church in Australia, Archbishop Simonds contributed to a growing movement to renew the Church’s understanding of itself. Understandably, the former seminary professor was acutely interested in the priesthood, and wanted to see the laity embrace a fuller understanding of the meaning of the Eucharistic celebration.

Archbishop Simonds was also a supporter of the healing and charitable mission of the Church. He oversaw the establishment of Calvary Hospital in Hobart and helped author the first Social Justice Statement issued by Australia’s bishops in 1940. But his Archiepiscopate was cut short in 1942 when he was appointed coadjutor Archbishop of Melbourne. He succeeded to that see in 1963 shortly after the opening of the Second Vatican Council.