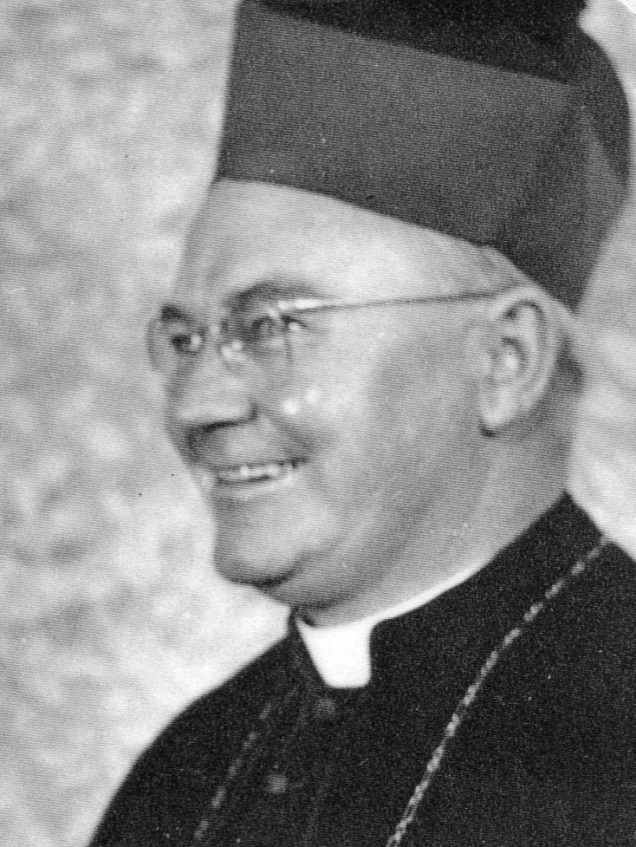 Motto: DILIGAMUS NOS INVICEM (Let us love one another)

“Ever since the war ended the welfare of the depressed people of the world coming into our midst has been one of my pet subjects.”

(Speaking at a children’s concert in Launceston, March 1953)

Although appointed Archbishop of Hobart during the Second World War, Archbishop Ernest Victor Tweedy’s main legacy lay in post-war developments. With peace came migration and with migrants, Tasmania changed. New suburbs needed churches and schools and the institutional apparatus of social welfare and medical aid. Archbishop Tweedy established eight new parishes, opened eight new churches, and oversaw the construction of aged care facilities, hospital wings, and the Glenorchy “Boys Town” orphanage, among other initiatives. He invited religious orders into the Archdiocese to accompany such pastoral expansion, and also facilitated the foundation of Tasmania’s home-grown religious order: the Missionary Sisters of Service, whose charism took them into the highways and byways of country Australia, tending to the spiritual needs of its people.

In all this Archbishop Tweedy exhibited much pastoral zeal, albeit often behind the scenes. Ironically, while Archbishop Tweedy was very interested in the quality of the Catholic press in Tasmania he received relatively limited press attention himself. He encouraged the Standard to conform to modern press expectations, insisting that the Church had to boldly and competently compete in the marketplace of ideas in a time of warring nationalisms and creeping ideologies. “I do not ask you to support your Catholic papers only out of a sense of duty,” Archbishop Tweedy announced in his statement for Catholic Press Month 1955. “They deserve your support on the basis of their own merit.”

This sense that the Church had to show the way, rather than just telling it, was a hallmark of Archbishop Tweedy’s apostolate in Tasmania, and clearly recognised by his contemporaries. In a beautifully hand-coloured address gifted him on the occasion of his Silver Jubilee, Tasmanian students thanked Archbishop Tweedy for the “sympathetic encouragement” he gave their teachers. It was a sentiment that probably best underlines how the Archbishop led his flock in a time of momentous social change.