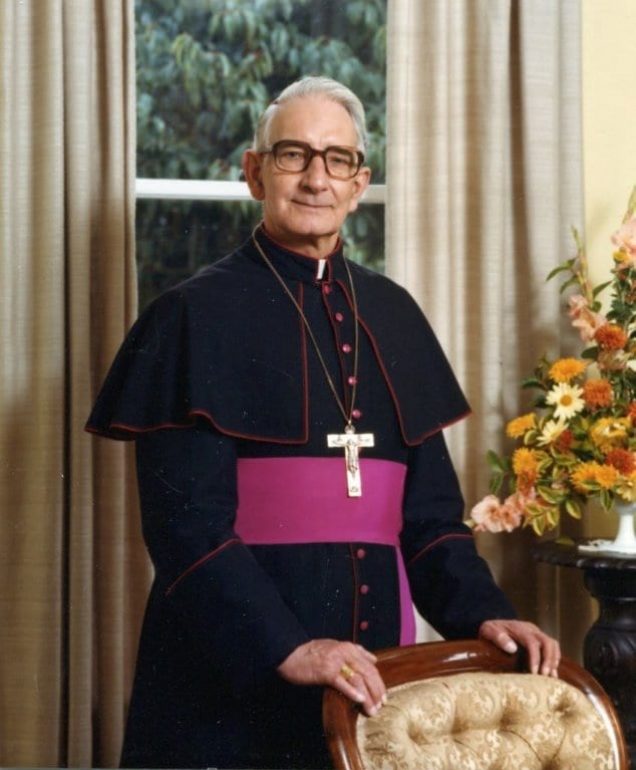 Archbishop Guilford Clyde Young was born in Sandgate, Queensland. He was ordained a priest for the diocese of Rockhampton in 1939, was ordained auxiliary bishop of Canberra-Goulburn in 1948, installed coadjutor archbishop of Hobart in 1954, and succeeded Archbishop Tweedy in 1955. He died in Melbourne in 1988.

Motto: PER IPSUM ET IN IPSO (Through Him and in Him)

“Finally, at certain points, one realised that indeed the Holy Spirit, the Finger of God, was here.” (Summing up the Second Vatican Council, 1965)

Archbishop Guilford Clyde Young was a shearer’s son born in rural Queensland, who attracted early notice for his scholarship. Awarded a bursary to study in Rockhampton, he applied to become a priest of that diocese when aged 16. He studied for the priesthood at St Columba’s College in Springwood, New South Wales, before being sent to Rome by St Columba’s rector, Dr Justin Simmonds. Archbishop Young was ordained in Rome in 1939 and was awarded a Doctorate in Divinity from the Pontifical Urban University of Propaganda Fide in 1940.

After returning to Australia, Archbishop Young held a series of notable appointments. After a short period attached to the Cathedral at Rockhampton he was appointed secretary to the Apostolic Delegation of Australasia in Sydney in 1941, taught theology at Pius XII Seminary in Brisbane from 1944, and was ordained auxiliary bishop of Canberra-Goulburn in 1948, aged 31, making him the youngest Catholic bishop in the world at the time. In 1954 he was transferred to the Archdiocese of Hobart as coadjutor archbishop and succeeded Archbishop Tweedy in 1955. Upon his arrival he enthused that “I feel that I have been plunged into a long and strong stream of tradition.” Archbishop Young then became the second-longest serving bishop of Hobart, with an episcopate spanning a period of great change in the Church and the world.

Responding to demographic growth and economic development, Archbishop Young proved to be a great opener of Churches and schools. Prominent in the national agitation for state aid for Catholic schools, he advocated a funding model that provided parents with choices and students with opportunities. Within Tasmania he opened 28 new Catholic schools, significantly extended 22 others, oversaw the establishment of the University of Tasmania’s St John Fisher College, established the Catholic Education Office and the Schools Provident Fund. In 1994 Guilford Young College was founded in honour of Archbishop Young, continuing the tradition of Catholic education for which he laboured.

Other lasting elements of Archbishop Young’s episcopate include the organisation he founded as the Catholic Family Welfare and Marriage Guidance Bureau, now CatholicCare Tasmania, and the Willson Training Centre for assisting the unemployed. Yet while supporting a robustly Catholic public identity, Archbishop Young also fostered ecumenical initiatives and embraced cultural diversity in a changing Australia. “Don’t think of abstractions when you’re thinking about human beings,” he once said. “Don’t think in terms of humanity, but think of Tom and Mary and Michael and John and Joan.” In recognition of his service to the Church and wider community Archbishop Young received a knighthood in 1979.

Offering tribute to Archbishop Young for “the contribution that he has made, over many, many years, not only to the Church of this island, but to the Universal Church”, Cardinal Basil Hume of England’s Westminster Cathedral drew particular attention to “his very important role that he has played in the forming of the Liturgy”. Before, during, and after the Second Vatican Council, Archbishop Young was a leading figure in the revitalisation of the Church’s liturgies, most especially the Mass. One of the Council Fathers, Archbishop Young addressed his fellow bishops on the matter of liturgical renewal and was a leading Australian implementer of the Council’s Degree on Liturgy. “The Church will become incarnate in the various cultures of the world,” he wrote to the people of Tasmania from Rome. Archbishop Young served as a member of the Sacred Congregation for Divine Worship, Vice-President of the International Commission for English in the Liturgy, host of an International Liturgy Conference in Hobart, Editorial Board Member and as occasional contributor to the journal Concilium.