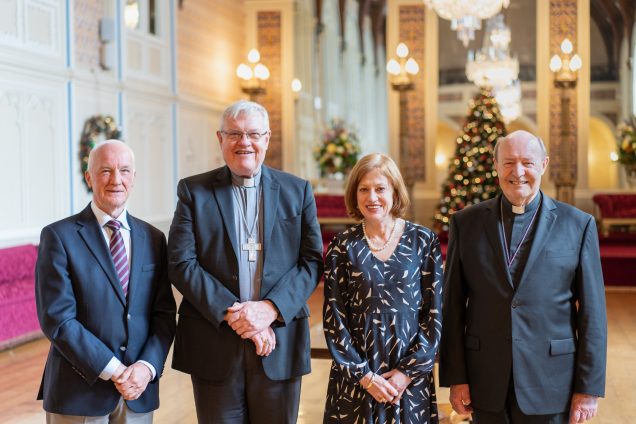 Apostolic Nuncio to Australia, Archbishop Charles Balvo, made his first visit to Tasmania from 2 to 9 December, for the reopening of the newly-restored St Mary’s Cathedral in Hobart.

As Nuncio, Archbishop Balvo is the Pope’s representative to Australia, a role he was appointed to in January this year. Over the past 17 years he has served as Apostolic Nuncio to the Czech Republic, Kenya, South Sudan, New Zealand, Fiji, the Cook Islands, Samoa and Nauru.

Since his appointment to Australia, Archbishop Balvo said Tasmania had long been his list of places to visit.

“It really has been a very beautiful experience,” he told the Catholic Standard at the end of his week-long tour of the state.

“Although I’ve only had a bit of a taste, it’s certainly very beautiful, [a] very varied landscape.”

“It’s a place that I’ve wanted to visit for a long time.”

During his visit, the Nuncio met with the Governor, and enjoyed tours of the Cathedral and crypt, as well as the Archdiocesan Archives.

He was able to visit several parishes including Bridgewater-Brighton, South Hobart, Campbell Town, Launceston, and Richmond.

The Nuncio also visited St Patrick’s College in Launceston and Our Lady of Lourdes Primary School in Devonport.

Visiting local parishes and schools and seeing “an active parish life” were “important moments” during his tour of the state, Archbishop Balvo said, and he was pleased to see “the commitment to Catholic education” and “the dedication of the teachers”.

He admired St Mary’s Cathedral saying it was “a very beautiful church”.

“A beautiful church is a good thing because a church is not just a building, a church is a teacher… through stained glass, through the different decorations, stations of the cross, saints and other things… it’s an instrument through which the faith can be taught,” Archbishop Balvo said.

A native of New York, he said that similar to the Church in Australia, there were real challenges for the faithful in the US, with falling numbers of people actively engaged in the life of the Church, particularly among the young. Adding to this was the decline in people attending Mass since COVID hit.

In the mission to evangelise, he said Catholics should have confidence that they are doing God’s work in spreading the message of the Gospel.

“We have the message of God’s love being made manifest in Jesus Christ. We have the testimony, the witness of so many who have gone before us.

“It’s a challenge, but to approach it with this positive mindset that God is behind us, we are doing God’s work, and in the end, it will be God who bears the fruit, who brings out the fruit of our work.