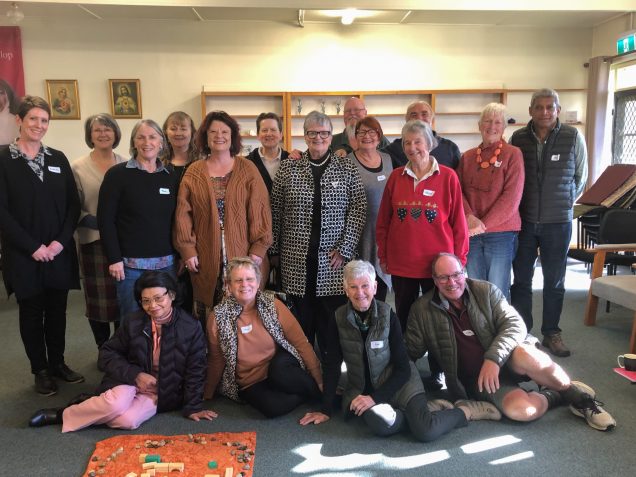 Nourishing people in their relationship with God was one of the aims of a retreat in Launceston last month entitled ‘Jesus in the Temple: stories of prayer and healing’.

The retreat focussed on many scripture stories of Jesus in the Temple. The three intertwining sessions invited participants to look deeper into Jesus’ invitation for the temple to be a place of prayer and healing and also to consider themselves as temples of the Holy Spirit.

The retreat directors were Maureen O’Halloran and Belinda Chapman, who are Catholic parishioners from Ulverstone and George Town respectively.

Some 22 people from the North and North West attended the event, at the Emmanuel Centre, Newstead, on 3 September.

Mrs Chapman explained the thinking behind the retreat’s theme.

“The topic was inspired by something we read on temple worship in the time of Jesus and the ‘cleansing of the temple’ story, found in all four Gospels, where Jesus initiates reform of the sacrificial system that sought to buy and sell God,” she said.

“Jesus speaks of the temple as a place of prayer and healing and demonstrates this Himself. For those who were excluded from the temple, Jesus took the temple (Himself) to them.”

Mrs Chapman and Ms O’Halloran were both encouraged and inspired by the openness and generosity with which people engaged with the reflection day.

“Our hope was that people could be nourished in their relationship with God, since that relationship is the foundational space of prayer; to recognise any healing that God is desiring to give them – from anything that causes exclusion, distance and blindness to God’s loving relationship with them; and to know themselves in a way that reverences the breath of God within them and within each other,” Mrs Chapman said.

A three-day retreat, ‘Hidden Things: The Retreat’ based on a previous reflection day for women, inspired by the story of the woman who washed the feet of Jesus with her tears, is scheduled for 24 – 26 March, 2023. Further details will be announced in due course.