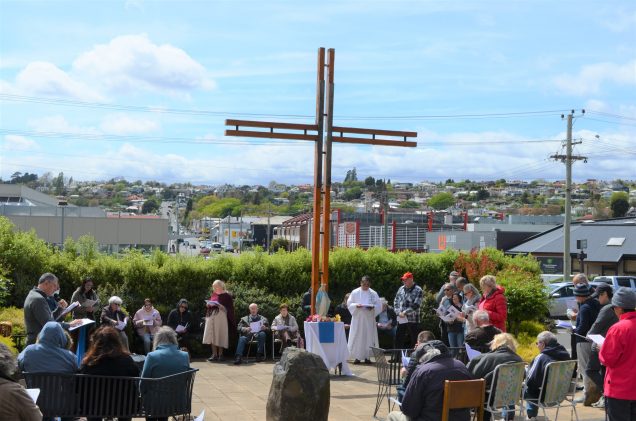 Several Rosary events took place during October, the month of the Holy Rosary.

In Launceston, a public Rosary outside the Church of the Apostles acknowledged the inspiring role of Miroslawa (Mary) Siejka, who died in September aged 93.

Mrs Siejka had a deep devotion to the Rosary and was a driving force behind the establishment of the public Rosary in Launceston.

Launceston organiser Rozanne Neskovcin addressed a crowd of more than 40 who gathered in blustery conditions near the cross outside the landmark church on 15 October to pray, sing hymns and seek God’s blessing on Australia.

“I would like to pay tribute to Mary Siejka, who passed away recently: May she rest in peace,” Mrs Neskovcin said.

“Mary started the Rosary Rally in Launceston about ten years ago. Until Covid came, and no public gatherings were permitted, the rally was held in the rotunda in [Launceston City] Park… The next three rallies were held here in the church grounds.

“Mary asked that we continue to hold the rallies and in future they will be held here at the foot of the cross.”

Fr Jessie gave the blessing. He said afterwards that the Rosary has always been an important part of his devotions.

“I like the Rosary as through the Mysteries of the Rosary we understand life,” he said.

“In life we experience these same steps – happiness or joy; sorrow or sadness; also, the luminous mystery – the light – as when we are sad, being God-centred gives us light; and if we place our faith in Jesus Christ, this is the glorious time of life we experience. This is the cycle of life itself.”

The Mersey Leven Rosary Pilgrimage on 16 October started at Port Sorell and took in Mass centres at Latrobe, Devonport, Sheffield, Penguin and finally Ulverstone for the Divine Mercy Chaplet followed by the Rosary, litany, adoration and benediction.

Mersey Leven assistant priest Fr Damien Sladen said that a ‘good crowd’ had attended and the event had gone smoothly.

One of the organisers, Meriam Murray, of Ulverstone, grew up with a devotion to Our Lady and to praying the Rosary and is keen to encourage others to share the devotion. She was thankful that severe weather conditions, and flooding, had not impacted the event this year.

“Two nights before the event our area was experiencing strong winds, with flooded areas, road blocks and warnings to those in dangerous areas to evacuate,” she said.

“However, on the day, we were led by a bright sun and dry roads to all six Mass centres. We started with six pilgrims from Port Sorell, other than those who just stayed in the church to join the Rosary. As we kept going, the number of pilgrims kept building up.

“We ended up with almost 50 in Ulverstone as the last stop. We were joined by pilgrims from Burnie and Wynyard.”

She said organisers were keen to increase active involvement in the pilgrimage, with parishioners from the individual Mass centres leading the Rosary.

“This is our 21st anniversary year of the pilgrimage,” Ms Murray said. “We started as the Pope at that time encouraged devotion to the Rosary. Our intention is devotion, and salvation of the world and to save the sinners.”

That Pope was John Paul II, who has been quoted as saying that Rosary devotions are ‘among the finest and most praiseworthy traditions of Christian contemplation’.

The annual public Rosary in Hobart was meant to coincide with the northern events but was delayed this year due to circumstances. It took place on Saturday 29 October in the grounds of St Mary’s Cathedral and was presided over by Archbishop Julian.

According to the pontifical foundation Aid to the Church in Need more than 840,000 people from 140 countries joined in the annual prayer initiative, praying the Rosary last month to ask for peace and unity throughout the world.