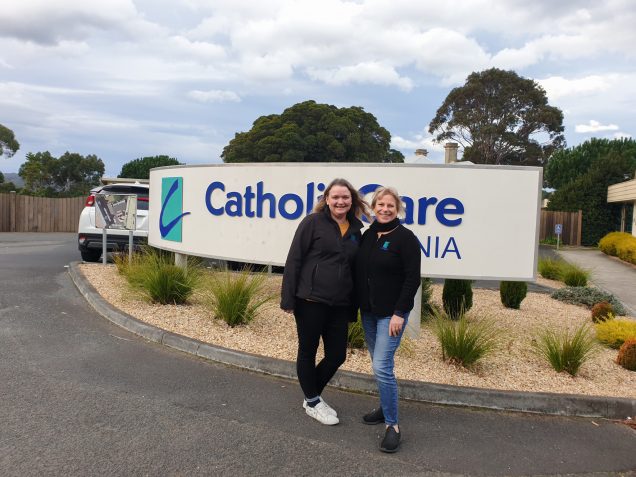 In December 2021, a young single mother was taken into custody and placed on remand in the Mary Hutchinson Women’s Prison.

By early February, a referral had come through to The Francis Program.

“She had never been separated from her children before, and she had not seen them or spoken to them since the day she was arrested six weeks earlier,” In-Prison Family Worker Tracy explained.

“After a further four weeks of liaison with Child Safety Services, the grandmother and staff at the new school, the first zoom call was conducted with support of the school social worker, reuniting the mother and children for the first time in two and a half months.”

The Francis Program, self-funded by CatholicCare Tasmania, assists parents and caregivers to strengthen their relationships with their children and build positive connections with their families and communities.

Program Team Leader Denise Leonard said “It is an example of the Church’s commitment to supporting the most vulnerable and very much in line with our values and mission here at CatholicCare”.

The program was inspired by Archbishop Julian and Pope Francis. It meets a clearly identified service gap by responding to the family support need of those who are incarcerated and either on remand or serving less than a six-month sentence within the Tasmanian Prison system.  This is a population that that is not well catered for in the area of family support or reintegration planning.   The Francis program is now meeting that need.

The importance of building these parent-child relationships is paramount, according to Community-based Family Worker Trish.

“Research shows that individuals who are incarcerated and receive family visits are 39% less likely to reoffend,” she said.

“Relationships are fundamentally important if people are to change.”

Since its launch in April 2021, The Francis Program has supported more than 130 parents.

Former program sponsor Belinda Clarke said the development of the Francis Program was a wonderful story.

“It is an example of the Church’s commitment to support the most vulnerable and to live out gospel values in tangible ways,” she said.

“It is a CatholicCare piece of work inspired by His Grace and Pope Francis.

“Pope Francis said ‘Jesus teaches us to see the world through his eyes – eyes which are not scandalized by the dust picked up along the way, but want to cleanse, heal and restore. He asks us to create new opportunities: for inmates, for their families, for correctional authorities, and for society as a whole.’”

Ms Clarke said the program was also keenly inspired and supported by Archbishop Julian, and is a CatholicCare Archbishop Project.

“In the charter for CatholicCare Tasmania, His Grace wrote ‘CatholicCare seeks to identify those who are particularly vulnerable in society and provide effective assistance to them’. An example of service includes ‘Support for newly paroled prisoners and their families’.

Archbishop Julian visits the prison to celebrate Mass at Easter and Christmas, while Prison Chaplain Fr Anthony visits once a month.

“The Francis Program is a wonderful example of CatholicCare living out its mission through a self-funded ministry,” Ms Clarke said.

In creating the program, Trish said CatholicCare had identified gaps and challenges in the Tasmanian Prison structure, particularly within the family context.

“International models revealed family workers within the prison space could have an impact and influence on individuals who are in prison and their children,” she said.

“A preliminary scope was undertaken on the request of the CatholicCare Leadership Team to research the Tasmanian Prison Structure and what the impact the criminal and justice system has on inmates and their families.

“The scope identified the lack of services and organisations that work holistic with this vulnerable group, particularly the children and families of prisoners. “

“Research has shown that children and their families affected by a loved one’s offending have been described as the ‘forgotten victims’ of the criminal justice system,” she said.

“This ‘hidden’ or ‘invisible’ group are disadvantaged and marginalised at the outset. When you add the stigma and shame within the broader community, the impact on them is extremely immense. The Francis Program recognises this impact and aims to accomplish the best positive outcomes for the prisoners and their families.”

Trish said the program resonated with Pope Francis’ mission, as he called for a greater effort to strengthen the capacity of the vulnerable ,in particular individuals who have been imprisoned, to sustain family life.

“The CatholicCare Leadership Team were encouraged by this vision of The Francis Program, and were excited by the opportunity to be positioned in the prison space, which has led to a three-year commitment of self-funding this project,” she said.

In her role within the prison space, Tracy provides family-related support to individuals on remand and those sentenced to less than six months.

Trish then supports individuals post-release to build and connect with their families and the wider community.

“I do this by building a rapport with the individual, gaining trust, being a link between the person and Child Safety, advocating on the person’s behalf where/when needed and referring on to specialised services which may include parenting programs and/or specific relationship programs,” she said.

“Another part of my role is to connect with the families of individuals who are incarcerated supporting them with emotional and practical assistance and referrals to parenting programs and or specialised services.”