Catholic educators draw inspiration from the Saints of Italy 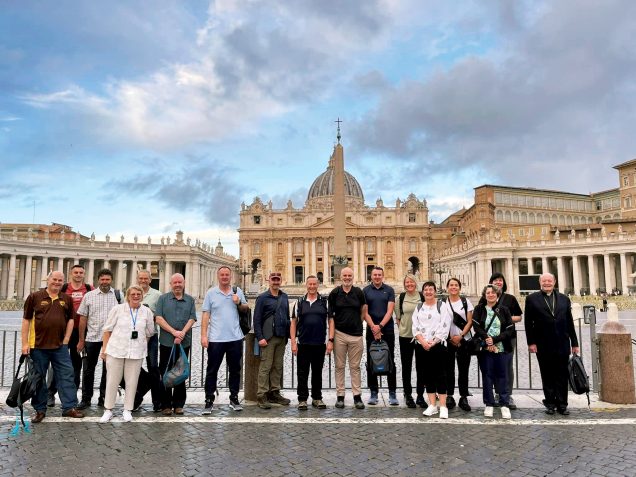 By Zac Piesse and Josh Low

Leaders and Principals from Catholic Education Tasmania (CET) last month experienced the ‘trip of a lifetime’ to Italy to renew their faith and deepen their relationship with Christ, inspired by the Saints.

Staff journeyed on the 13-day pilgrimage with Archbishop Julian, visiting some of the world’s oldest and most significant Catholic churches and shrines.

The pilgrimage saw visits to the cliff-facing Monastery of St Benedict and the Abbey of Montecassino, the Basilica of St Paul Outside the Walls to pray at the tomb of St Paul, the tombs of Blessed Carlo Acutis, St Francis and St Clare in Assisi, relics of St Catherine in Siena and a private Mass celebrated by Archbishop Julian in the crypt underneath St Peter’s Basilica, among other highlights.

The celebration of the liturgy, drawing inspiration from the saints, engaging and developing relationships with fellow travellers, as well as personal prayer and reflection, were the focus of the trip.

Archbishop Julian said the purpose of the pilgrimage was to help those involved in Catholic education to experience the heart of the Church.

“We hoped that through visiting the tombs of the Saints, that they be drawn more deeply into the rich tradition of the Church – particularly the spirituality and life of some of the great saints of the Church, in the hope that they would be enriched in their own sense of Catholic identity and enflame their own faith.”

CET Executive Director, Dr Gerard Gaskin, said the pilgrimage lived up to every expectation, with his personal highlight being the Papal audience in St Peter’s Square.

“Fifteen Principals and Senior CET leaders participated in what can only be described as a genuine opportunity to grow in our faith and in our understanding of the rich spiritual and cultural legacy that the Catholic Church has given and continues to give to the world and to our history,” he said.

“To celebrate a papal audience with the Catholics of the world in their tens of thousands is a reminder of the global breadth and spread of our faith.”

He added that it was a blessing and privilege for all attendees to attend the trip together with His Grace.

“We were fortunate enough to experience firsthand so much of our Catholic culture, heritage and tradition, while immersing ourselves in the rich stories and lives of many of our Saints,” he said.

A particular highlight for St Paul’s Catholic School (Bridgewater) Principal, Jo Clark, was visiting the tomb of St Paul and praying for her school and parish community, named after the great Saint.

“It was an absolute privilege to be part of the Saints of Italy Pilgrimage 2022 with fifteen other Principals, CET Leaders and led by Archbishop Julian,” she said.

“All our experiences were formative for us as leaders and will deepen our prayerful and reflective leadership as we lead our communities and share our faith in the future.”

During the trip, Archbishop Julian also had the opportunity to meet with the Holy Father, Pope Francis, during the Wednesday Papal Audience on 5 October, as well as the Australian Ambassador to the Holy See, Chiara Porro.

“I explained to the Holy Father that I had come (to Rome) with staff from Catholic education, and he was impressed that we had come so far.

“It was my second opportunity to personally meet the Holy Father and of course, extended greetings on behalf of the Catholics of Tasmania,” Archbishop Julian said.