A life in the hands of the Potter 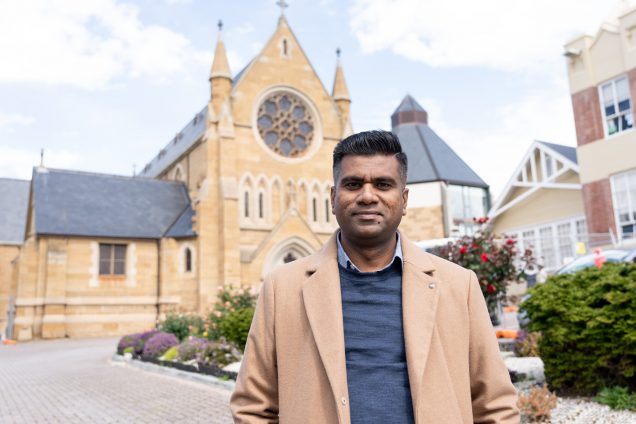 Offering his life up for Christ like clay in a potter’s hand, to be moulded and used by the Lord, is how Vinco Muriyadan sees his calling to the priesthood.

As he awaits his ordination to the Diaconate on 30 November, he spoke about his vocation journey.

Born in Kerala, India as the oldest of three siblings and originally raised in the Syro-Malabar Catholic Church, Vinco said having his parents as primary educators in the faith, along with his family’s devotion to Our Lady, provided a strong foundation as a child.

“From a young age the ‘loving, caring and generous’ image of Jesus was always an inspiration to me, and sort of developed a strong desire to become a priest.

“Then through family and youth ministry in the parish, that desire was nourished,” Vinco explained.

“Coming from a God-fearing family gave me every opportunity to explore my vocation to the priesthood.

“My father especially, was such an inspiration to my vocation. I remember him sharing his personal version of his ‘Golden Rules’ – to always give importance to God in life and not to focus on what others do to you, but to do the best you can for others; otherwise, there is no difference between you and them.”

Before joining the seminary, Vinco had completed a master’s degree in Literature, followed by some time spent teaching and lecturing at a college in India.

However, it was during his teaching career that he came to realise that God was calling him to something different.

“During my teaching career I desired and prayed to understand what God was calling me to.

“Of course, I had moments of doubt and confusion, but all those moments led me to better clarity in my vocation.”

Vinco explained that through God’s grace and providence, after spending one and a half years with the Missionaries of God’s Love, he discerned a vocation to diocesan life and received an invitation from Archbishop Julian to join the Archdiocese of Hobart.

“I joined the Corpus Christi Seminary in Melbourne for formation and underwent most of my studies at the Catholic Theological College in Melbourne.

“As a seminarian, I was going through human, spiritual, intellectual and pastoral formation and also had many opportunities to do my pastoral services in many institutions like St Vincent’s Hospital, the Missionaries of Charity Sisters Soup Kitchen, and St Xavier’s College.

“My pastoral placements in Kingston, Claremont and the Cathedral parishes also helped me to grow in these areas,” he said.

As he now prepares for the upcoming ordination to the Diaconate and journey towards the priesthood, Vinco firmly believes God and Our Lady are watching over him every step of the way as he hopes to bring God’s love to His people.

“I want to know Jesus more and more, walk with Him in my personal struggles, prepare myself to be with people, whether young or old, and share the love and joy of Jesus.

“Priesthood is for me like the clay in the hands of Jesus as a potter.

“He can take me, use me, mould me; I give my life totally to the Potter’s hand.

“In doing so, I hope to share the gift entrusted to me, and to share in the life of the people of Tasmania,” he concluded.