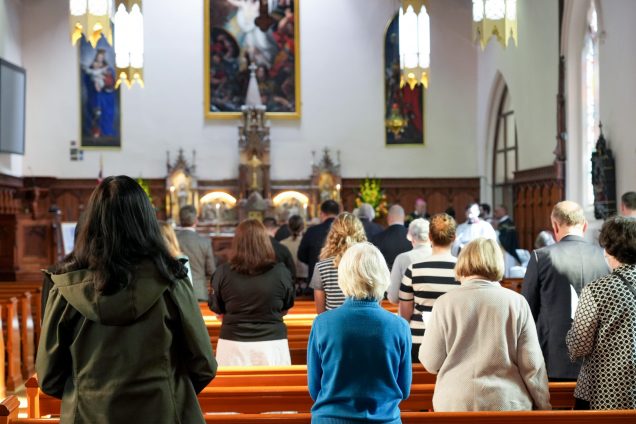 Last month’s passing of Her Majesty, Queen Elizabeth II, saw billions of people across the world reportedly tuning in to watch her funeral on Monday 19 September.

With Thursday 22 September chosen as the day to mark the passing of the Queen in Australia, the Catholic community came together that morning at St Joseph’s Church in Hobart as Archbishop Julian celebrated a Requiem Mass for the repose of her soul.

In his homily, Archbishop Julian commended Queen Elizabeth’s commitment to serve, reflecting on how her Christian faith provided her with a framework for doing so in love.

He shared the words of the Queen from the year 2000, which marked two millennia since the birth of Jesus Christ.

“To many of us our beliefs are of fundamental importance. For me the teachings of Christ and my own personal accountability before God provide a framework in which I try to lead my life. I, like so many of you, have drawn great comfort in difficult times from Christ’s words and example,” the Queen had said.

Archbishop Julian said that although she was a monarch, Queen Elizabeth knew clearly that she had ‘personal accountability before God’.

“What has marked out her qualities of character is the Christian message in which she deeply believed,” he said.

“Clearly, the Queen grounded her life firmly within her Christian faith. She understood only too well that faith is, as she said, of “fundamental importance”.

Reflecting on the reading of the day, His Grace drew parallels between St Paul’s letter to the Romans and the Queen’s Christian faith.

“We can admire Queen Elizabeth’s steadfastness amidst moments of trial and personal sadness.

“Here again we sense that her personal faith was her sure support.

“Today, chosen in Australia as a day of mourning to mark the passing of Queen Elizabeth, we, the Catholic community, pray for the repose of her soul.

“We commend to the Lord a woman of deep faith whose life was one of faithful service.

“She sought none of the prerogatives of her status, but saw her life as one dedicated to people.

“She based her life on the teachings of Christ and sought both inspiration and comfort from the Christian gospel. May she rest in peace.”

Following the passing of the Queen, Archbishop Julian visited Government House with Archdiocesan Executive Director, Chris Ryan, to meet with the Governor of Tasmania, Her Excellency, the Honourable Barbara Baker AC.

Their visit gave them the opportunity to offer their condolences on behalf of the Catholic community of Tasmania, as well as discuss Her Majesty’s contribution to the state and the country.

They also signed two condolence books, one of which has been sent to Buckingham Palace and the other retained at Government House.