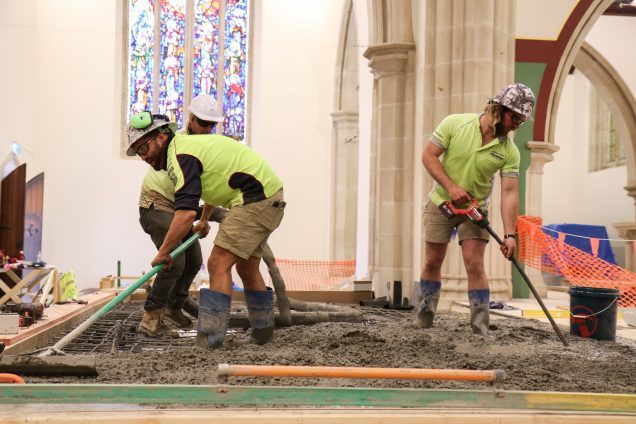 There was a real “sense of history” in the air when the altar of St Mary’s Cathedral in Hobart was carefully moved from the place it has stood for more than five decades, as part of the on-going restoration work.

The Bass altar, as it is known, was relocated from the cathedral’s forward sanctuary to a vacant devotional chapel, making way for the new smaller altar due to arrive mid-October.

A small box was discovered within the base of the historic altar containing a two-page document thought to have be in the artist Tom Bass’s hand and signed by Archbishop Guilford Young.

The letter dated 17 May 1961 states, “Almighty God, may this altar erected to your glory by your servant Guilford and your faithful people stand indestructible against the onslaught of your enemies; look down in favour on those who gather round it to offer the bread of life and the cup of salvation; grant that life-giving streams of grace may flow forth from it into this Archdiocese of Hobart.”

Archdiocesan Master of Ceremonies and Restoration Project Manager, Michael McKenna, said the Bass altar was treated with “great respect and dignity” as it was reestablished in the vacant devotional chapel which will be restored as a chapel dedicated to St Joseph.

A new letter was placed inside the altar, signed by all those involved in moving it to its new location, as well as a St Joseph coin which is a feature of builds undertaken by St Joseph Affordable Homes who are the builders for this phase of works at the Cathedral.

Mr McKenna said there was a “buzz” among those involved in moving the altar, and “a real sense of history as we worked to preserve and pass on to the generation that follows this significant piece of the cathedral’s patrimony”.

It is hoped that a relic of St Mary MacKillop will soon be installed in the St Joseph Chapel and that it might become a place of pilgrimage in the future.

Kelsey Timms who is coordinating the works on the Cathedral undertaken by St Joseph Affordable Homes, said it had been a “really rewarding” project for everyone involved, particularly for the Build Up Tassie apprentices who were “excited” to be involved.

The painting work within the Cathedral has almost been completed, with the original colour scheme restored in the chancel. Refurbishment of the pews is also nearing completion, as well as installation of the new lighting system. The new terrazzo flooring is due to be laid in mid-October.

“Many will have a view on how the restoration ought to proceed but it is my hope that as this stage is realised we will all agree on the sublime beauty of our restored cathedral,” Mr McKenna said.