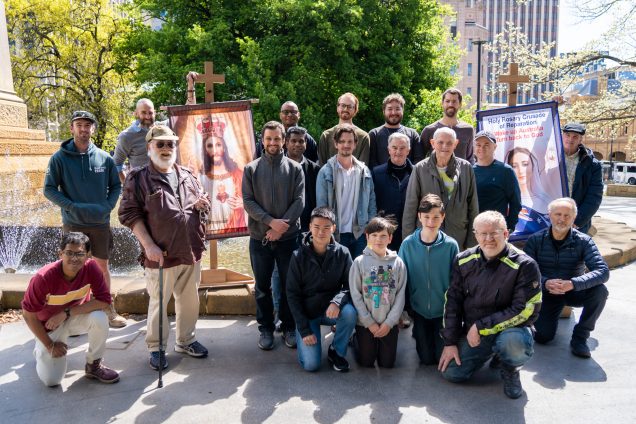 More than 20 men gathered for the first time last weekend in Hobart as part of a men’s Rosary crusade, a movement which has gained momentum in Australia and around the world.

Held at Franklin Square in Hobart on 8 October, the local event was part of a global men’s Rosary crusade which saw men not just across Australia, but from approximately 30 countries around the world praying the Rosary together publicly in their respective cities.

The worldwide movement was originally inspired by the numerous men’s Rosary processions which have been held on the first Saturday of each month across 25 cities in Poland for several years.

In Australia, the Men’s Rosary Crusade movement began in Sydney through a lay men’s initiative known as the “Knights of the Precious Blood” and is held on the first Saturday of each month.

Local event organiser, Adam Wundersits, said the Global Rosary Crusade coming to Tasmania was a great opportunity for Catholic men to unite in prayer as part of a Catholic brotherhood with the rest of Australia and the world.

“There is a long history of public prayer within the Catholic Church,” he explained.

“The Men’s Rosary Crusade last weekend was timed to coincide with the month of October, the month dedicated to the Holy Rosary, with this specific Saturday chosen as it was the day after the Feast of Our Lady of the Rosary.

“It was a great opportunity for Catholic men to engage with their faith and this tradition,” he said.

“The call for the worldwide Rosary Crusade is to make reparation and atonement, to pray for repentance and the conversion of sinners, peace in the world and in families and for the reign of the Sacred Heart of Jesus and Immaculate Heart of Mary in the hearts of men, families and society.

“As fathers, sons and brothers we can take a lead and unite together in prayer and fraternal Charity, demonstrating our devotion to our Blessed Mother,” he said.

One of the participants, Chris Smith, said the event was a resounding success and hoped it would continue into the future.

“Coming out here meeting a bunch of blokes; genuine men who understand what it means to be a man in society today and who love the faith has been great.

“Being a part of this – it makes you feel like you’re making an impact, especially in a world that has forgotten God.

“Being a public witness is sort of ingrained into being Catholic, so it’s important that we’ve come out here to do just that,” he said.