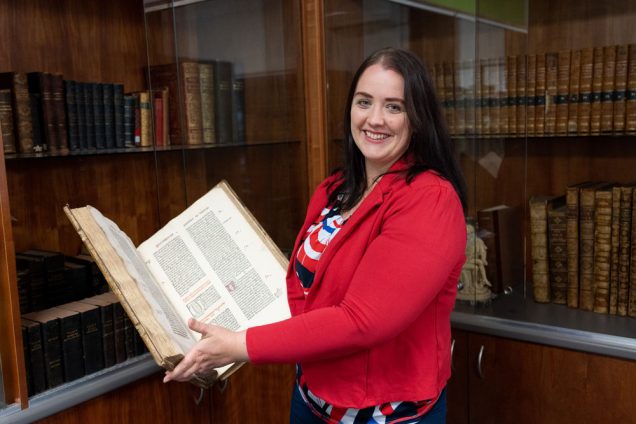 This month, one of the Archdiocese’s oldest and rarest items turns a staggering 545 years old. Bequeathed to Catholic Education Tasmania by the late Fr John Wall (1937-2004), the Latin Vulgate Bible printed in September 1477, is in remarkably good shape considering its age.

“It’s quite significant to have a really old example of this type of printed book in Tasmania, let alone Australia,” commented Anita Gill, Librarian at the Fr John Wall Community Library in New Town, where the historic bible is kept.

“We don’t know exactly how many of these books are in the world. It is listed on the register at the British Library that has a list of these old incunabula. But we are certainly the only one we know of in Australia who has a text like this, so [it’s] very significant,” Ms Gill added.

The term “incunabula” refers to books printed prior to 1500, a phase of history when the printing press was rapidly changing Europe, following its introduction by German Johannes Gutenberg around 1440.

With 50 lines per page, Ms Gill said the bible was “a very unique early printed bible”, and was based on the original Latin translation of the bible by St Jerome.

“It’s in wonderful condition, basically because of the quality of the materials used in the book.”

The bible was bound with oak wood and then covered with a pig skin vellum, into which was imprinted various floral designs still clearly visible today. Tiny holes caused by historic bookworms (wood boring insects) are dotted across the cover and some of the pages, adding to the charm of the ancient book.

Printed in Basel, Switzerland by Bernhard Richel in September 1477, it is believed the bible was owned by Prince Augustus Frederick, the Duke of Sussex (1773-1843), and following his death in the 19th century became the property of Scottish painter, Sir George Harvey (1806-1876).

How it was acquired by Fr Wall remains somewhat of a mystery, according to Ms Gill, who suspects he may have purchased the book for 750 pounds in London in the 1960’s.

Fr Wall was a lecturer at the University of Tasmania and as a young priest had studied at Cambridge University. Specialising in Medieval English and proficient in several languages, he was often invited to speak at universities around the world.

Fr Wall also assisted Archbishop Eric D’Arcy in editing the English translation of the Catechism of the Catholic Church. Following his retirement from academic life he served as parish priest at Latrobe and Sandy Bay.

Upon his death in 2004, Fr Wall bequeathed a large collection of books and artefacts, including the Vulgate Bible to Catholic Education.

The bible is now kept in a temperature-controlled room in the Fr John Wall Community Library, and can be viewed upon request.

“We’re blessed by the fact that the quality of the materials in the book will keep it alive for many years, whereas younger books just don’t survive the test of time,” Ms Gill said.

“It’ll quite likely still be with us in another 500 years.”