Youth Matters – Guides on the way: Two Irishmen walk into a bar… 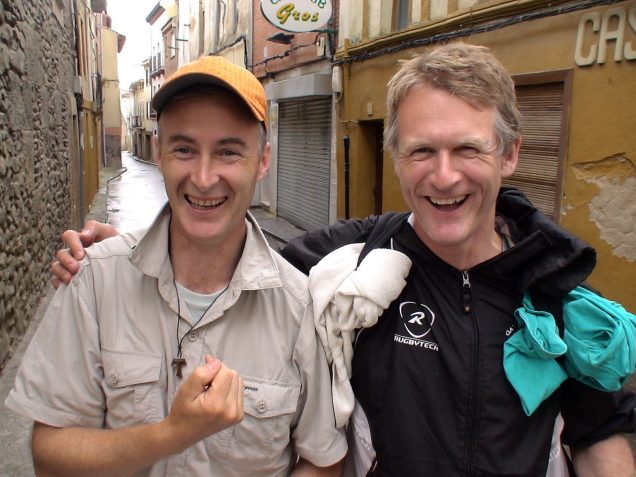 Pat and Oisin (‘O-sheen’) met when the three of us walked into a bar one evening on the Camino de Santiago in northern Spain. We introduced ourselves, bought dinner and sat outside in the twilight sharing our stories. Oisin was a husband, a father of five, and a teacher of physical education and Gaelic. Pat wasn’t overly fit, couldn’t speak Gaelic and had recently separated from his wife. We became friends that evening and walked on together for the following week.

Two days in I asked them if they’d like to join me in praying a rosary. Oisin plucked rosary beads from his pocket, “Let’s do it.” Pat though hadn’t prayed a rosary since his childhood but happily agreed, “You guys lead, and I’ll follow.” The golden wheat and barley fields of the Spanish countryside rolled past as we prayed. It was beautiful.

As we concluded with the sign of the cross Oisin suddenly leapt sideways with a yelp; no one had noticed the small snake sunbaking on the track and Oisin had just accidentally crushed its head. Pat lit up, “Guys! This is symbolic. We just prayed for the first time in my adult life and then crushed the serpent’s head! We all must crush its head!” Oisin backed further away, “I’ve done my bit. I’m not going near it.” Without hesitation Pat threw his boot down to finish the snake off.

The moment was significant for Pat, and even more so when Oisin asked why he hadn’t prayed in so long. Pat shared candidly about life and its struggles, and in turn Oisin shared similar struggles, but with different approaches to navigating them with his wife. The conversation continued for days.

In the rural town of Castrojerez, with its fortified castle looking over us, we agreed to meet at 6am the next morning to walk on, but when that time came Pat appeared without his backpack, “Where’s your gear?” Pat smiled, “I can’t fix my marriage here. I’m going home.”

Oisin and I smiled, and each gave him a massive hug. We walked on praying for Pat and as we summited a massive hill an hour later, we watched his bus drive out across the plains. “He’s chosen the right Camino”.

Oisin’s gentleness, compassion and empathy were immense. Six months later we both received an email from Pat. It contained a photo of him and his wife, smiling broadly, standing arm-in-arm on a beach, and just a few words, saying, “Thank you for walking my pilgrimage with me. We’re loving life together again.”

“A wise man’s heart guides his mouth, and his lips promote instruction. Pleasant words are a honeycomb, sweet to the soul and healing to the bones.” Proverbs 16:23-24