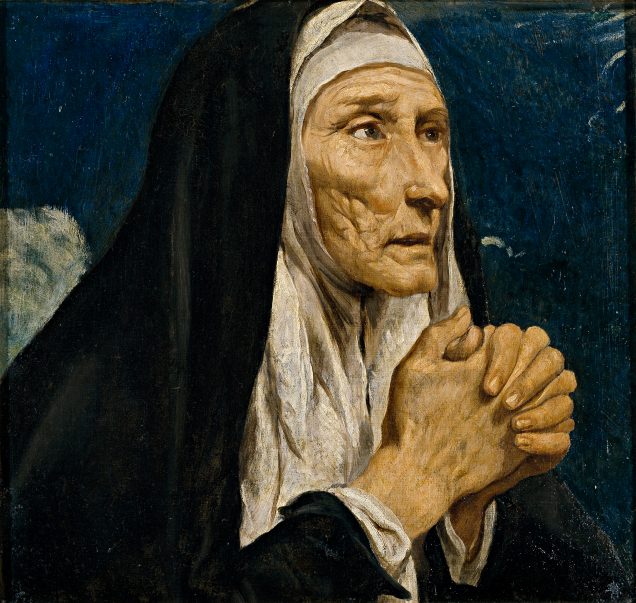 If ever there was a saint who exemplified perseverance in prayer, it is St Monica, the mother of St Augustine of Hippo. Monica seems to have spent most of her life as an intercessor for others, praying for their conversion to the Catholic faith, including that of her famous son.

Monica was born in Thagaste—present day Algeria—in 331. When she was still quite young her parents arranged for her to marry a Roman pagan named Patricius. Both Patricius and his mother, were known to have a violent temper, of which Monica often bore the brunt. It is said that Patricius was also unfaithful to Monica.

Monica and Patricius had three children—Augustine, Navigius, and Perpetua. Monica prayed incessantly for many years for the conversion of her husband to the Catholic faith. Her perseverance paid-off, and both Patricius and his mother eventually converted. In 371, just one year after his baptism, Patricius died.

While two of her children, Perpetua and Navigius, entered religious life, Augustine proved to be a far tougher nut to crack. Intelligent and talented, Augustine was also lazy and he began a life of pleasure-seeking and self-indulgence after commencing his studies in rhetoric at Carthage at the age of 17. He also became a member of the Manichaean religion, which taught that the universe consists of two competing powers—good and evil—with good pertaining to spirit and light, and evil to the material world.

Exhibiting the ferocious love of a mother who never gives up on her children, Monica followed Augustine first to Rome and then to Milan. She never stopped praying for his conversion to Christ. It is said that she and St Ambrose, who was Bishop of Milan and a brilliant orator, were both influential in Augustine’s conversion. St Ambrose also became Monica’s spiritual advisor.

Augustine was baptised by Ambrose in 387 and was ordained a priest in 391.

It seems that once Monica had secured the conversion of her son she felt her life’s mission was complete. Before she died in 387, Monica said to Augustine, “Son, nothing in this world now affords me delight. I do not know what there is now left for me to do or why I am still here, all my hopes in this world being now fulfilled.”

Initially buried in Ostia, Monica’s remains were later moved to Rome in 1430. Appropriately, the tomb of this great saint is now housed in a church named after her son, the Basilica di Sant’Agostino, one of Rome’s many hidden treasures, tucked away in a little courtyard just a stone’s throw from the famous Piazza Navona.