FROM THE ARCHIVES: Gougane Barra and Rev John O’Mahony 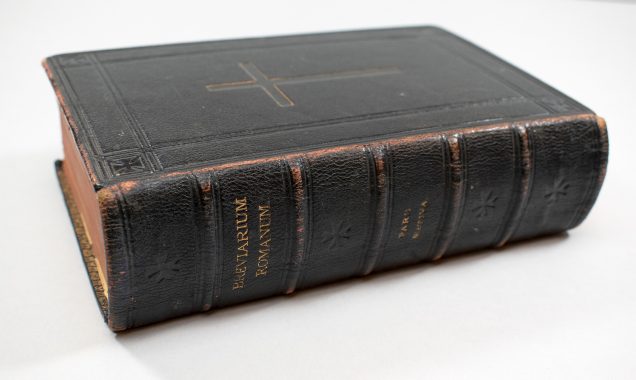 One of the many perks of working at the Archives, is the privilege of working with such an interesting collection. Staff and volunteers all have favourite objects and Rev John O’Mahony’s leather bound breviary, published in 1886, is one of mine.

Rev John O’Mahony was born in Bandon, a small town, south west of Cork city in Ireland. He studied for the priesthood at Maynooth Seminary and worked in his home county as a chaplain for the Northern Presentation convent, the Bon Secours Convent and the county goal.

He also held a position at St Finbarr’s Seminary for a time. He arrived in Tasmanian in 1889 and was appointed as assistant priest to the Church of the Apostles in Launceston. Fr O’Mahony was also the editor of the weekly Catholic newspaper, the Monitor, that was published in the same city.

Fr O’Mahony’s breviary has a particularly interesting feature. On the flyleaf (blank page at the front of the book), is a tiny oil painting of an isolated place in west Cork, called Gougane Barra. The name Gougane Barra comes from Saint Finbarr, who is believed to have founded a monastery there.

Its remote location meant it became a popular place for Mass to be celebrated during the time of the penal laws.

The painting in Fr O’Mahony’s breviary depicts a hermitage at Gougane Barra that dates from the 18th century; ruins of which remain today.  A quick google search will generate images that mirror the painting, almost exactly; as if time has stood still.

It is possible that Fr O’Mahony was presented with this breviary before he left for Australia, with the tiny painting a reminder of home.

It is just one of many objects held at the Archives, that add extra layers of detail to the stories of people’s lives; their work, faith, travel, sacrifice and adventure. Like Fr O’Mahony, so many came to Tasmania, never to see their homeland, nor family, again.

Fr O’Mahony died in Launceston in 1915. His funeral was reported in the Mercury and it was said that “his generosity extended beyond the limits of his own flock”.  He is remembered as a dedicated priest, scholar and journalist and we are lucky to have such a beautiful book that travelled with him, from Cork, all those years ago.