Defending ‘the world that flows from Bethlehem’ 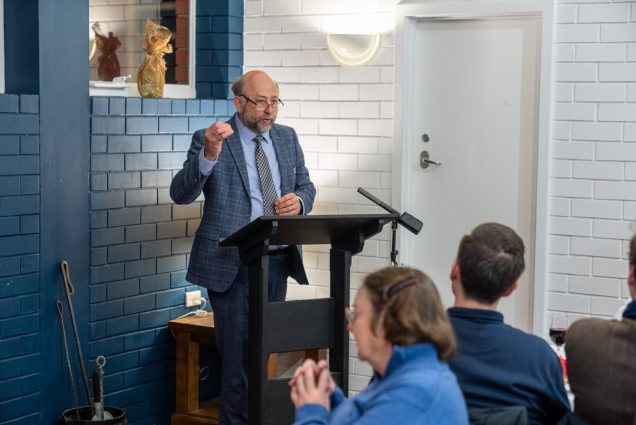 ‘Freedom of Speech and Religion’ was discussed by a variety of eminent speakers at the annual Christopher Dawson Centre Colloquium held on 16 July in Hobart.

Keynote speaker Dr David van Gend said people of faith, and those holding conservative views, were increasingly being intimidated into silence by “lawfare”, the approach of taking someone to court because you find their views offensive.

The family doctor and commentator on bioethical issues argued that Christians needed to define and defend their “moral domain” by not relinquishing key “stakes” such as the rejection of abortion and euthanasia, “the desecration of human life through embryo experimentation and the trashing of the human trinity [of] man, woman, child, through homosexual marriage and gender ideology”.

“Those who despise our Judeo-Christian heritage now control the high ground of our culture, particularly the fields of education, media, medicine, law, and global politics,” Dr van Gend said.

“The task for all of us who love the world that flows from Bethlehem, not Mordor or Beijing, is now to stake out and fiercely defend our own cultural space against those who would impose their alien ways.”

Dr van Gend said the legal redefinition of marriage following the plebiscite in 2017 was “the final blow” from cultural Marxism which sought to deconstruct marriage and the natural family.

Despite an increasingly hostile culture in the West, he said Christians would continue to defend what is true and good.

“Christians will remain proud citizens of no mean city and we will defend the noblest liberties of our civilisation, even as the barbarians reduce it to rubble.

“Because we know that the liberty to speak what is true and to love what is good is ours by right as minds made to resonate with the mind of God.”

Archbishop Julian Porteous gave his address on ‘The Two Wings – Faith and Reason’, arguing that the answer to ideology which currently dominates Western culture was faith in the Transcendent.

“Faith takes a person outside themselves. There is Another to whom one looks. Meaning and purpose are found outside a driving idea. They are found in the person of a loving and merciful God.”

Archbishop Julian also said ideology would be “overcome by people who adhere to the belief that there is truth, objective and enduring truth”.

“While we cannot argue with an ideologue, it is possible to be a humble witness to truth.

“In other words, it will be the interplay of faith and reason that will ultimately provide the antidote to ideology.”

Director of the Christopher Dawson Centre for Cultural Studies, Dr David Daintree, said the speakers at this year’s Colloquium had been “consistently good”.

“It’s so thrilling to see it all come together,” he said.

To view all the talks from this year’s Colloquium, visit the Christopher Dawson Centre for Cultural Studies’ YouTube channel.