Deacons recommit to ancient ministry of the Church 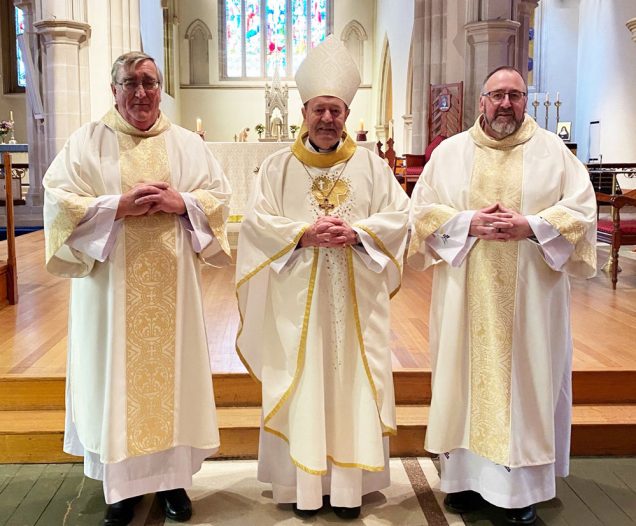 On Saturday 11 June during a special Mass at St Mary’s Cathedral in Hobart, the Archdiocese’s permanent deacons renewed their Ordination Promises in the presence of Archbishop Julian.

Deacon Michael Smith of the Kingston-Channel Parish and Deacon Michael Hangan of the Moonah-Lutana Parish renewed their vows, while Deacon Nick MacFarlane was absent due to COVID-19.

“Though few in number, your identity is important in the Church,” Archbishop Julian said.

“The ministry of deacon was established in the infant Church as a clear decision of the Apostles. We have always had deacons in the Church, even if for a period the ministry was seen as a pathway to priesthood.”

“The Second Vatican Council restored the Ministry of Deacon as a specific vocation. And that is what it is. It is not just a halfway point to the priestly ministry, but it stands in its own right.”

During the Prayers of the Faithful, recognition was given to the importance of the support provided to the deacons by their wives. Deacon Hangan’s wife Eva, and Deacon Smith’s wife Christine, were present at the Mass.

“None of these men would be able to accept this ministry without the integral support and participation of their wives,” Deacon Smith said.

“The deacons of the Archdiocese of Hobart and our wives meet regularly to discuss, train and encourage each other in this role and we are excited that we are now being joined by our two aspirants and their wives.”

Deacon Nick MacFarlane was ordained to the Diaconate 15 years ago, sparking renewed interest in the vocation within the Archdiocese. Following in his footsteps, Deacon Michael Hangan was ordained nine years ago, and Deacon Michael Smith four years ago. There are currently also two aspirants in training for the Diaconate, Heru Santos from the Campbell Town Parish, and Paul Becker from the Glenorchy Parish.

“I have always felt that every parish should have a deacon as well as a priest,” Archbishop Julian said.

“I encourage you to always seek Christ and daily ponder his teaching, that you may become more and more conformed to him,” Archbishop Julian told the deacons.

“May God bless you and your wives, and give you joy in his service as deacons.”