After some ‘disruption’ the Fifth Plenary Council draws to a close 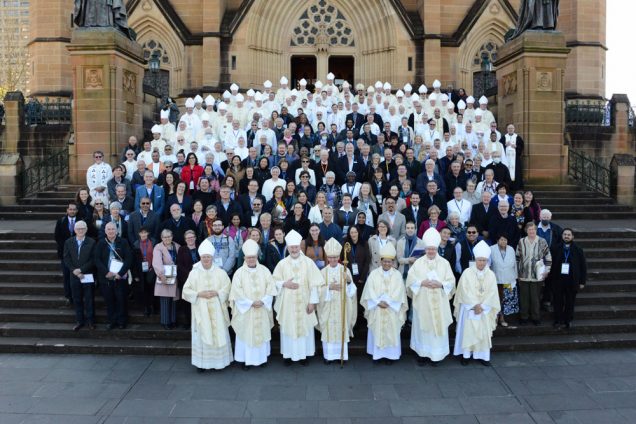 The four-year journey of the Fifth Plenary Council of Australia finally drew to a close on Saturday 9 July, after a week of deliberation and voting that was not entirely without drama.

From 3 to 9 July the 277 Plenary Council members, consisting of bishops, clergy, religious and lay people, came together in Sydney for the Second General Assembly, and voted on more than 30 motions. The motions were the fruit of the preceding three years of listening, dialogue and discernment.

The motions voted on by the Council covered the areas of the recognition and inclusion of Aboriginal and Torres Strait Islander people and their culture, forming missionary disciples, the role of women in the Church, adopting a more “synodal” model of governance within the Church, and “integral ecology” and care for the environment.

Proceedings were disrupted on Wednesday 6 July, the fourth day of the Assembly however, after two motions on the role of women in the Church failed to pass. A group of members of the Council, predominantly women, stood in protest following the vote.

The motions put forward included ensuring women were represented in the Church’s decision-making structures of governance, and that support be given to women’s ordination to the diaconate.

In a press conference following the vote, President of the Australian Catholic Bishops Conference (ACBC), Archbishop Mark Coleridge, said the failed motions and subsequent response from Council Members had been “genuinely disruptive” and that there had been “a prevailing sense of distress”. People were “disconcerted” he said, because “something had gone wrong”.

Revised versions of the two motions were revisited later in the week and were successfully passed.

ACBC Vice President, Archbishop Anthony Fisher OP was reported in The Catholic Weekly as saying that despite the “division and drama” of the week, it remarkably “did not break the Church”.

“It did not lead to a walkout or schism or an alternative assembly being set up down the road as we’ve seen at different times in history,” Archbishop Fisher said.

Archbishop Fisher did lament however that only a select range of topics were the focus of the Council:

“So much attention has been given to ‘governance’ and the role of women in church governance and ministry,” he said.

“But where are lay men in all of this, or mothers, or religious women and men, or Catholics whose principal vocation is in the world? All these are almost completely absent from the resolutions. There’s very little that speaks to the crisis of vocations to marriage and parenting, and to priestly and religious life.”

“The Council concluded without addressing this urgent need”, he added.

In his homily for the closing Mass, Archbishop Timothy Costelloe SDB, President of the Plenary Council, cautioned Council Members saying, “There will be no renewal of the Church if we put ourselves above Christ or in some perverse way push him to the margins”.

“We have made some decisions, opened up some possibilities, and experienced the depth and complexity of some of the challenges we face,” Archbishop Costelloe said.

The Decrees of the Plenary Council will need to be approved by the Australian Catholic Bishops Conference within one year of the closing of the Council.  Once approved, the Decrees will be sent to the Apostolic See in Rome to be reviewed and can only be promulgated after being granted approval by the Apostolic See.