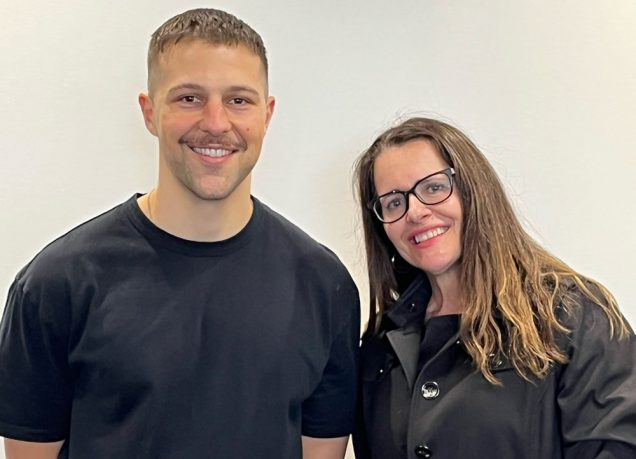 “What girls are telling us is they are subject to every day routine sexual harassment,” she said.

“Everywhere we go girls tell us they are subjected to name-calling, to touching, to being groped, to having their breasts grabbed, having their bum groped as they walk through school corridors, they’re being pressured to provide sex acts even at school.”

A current trend is for boys to make “sexual moaning” noises anytime they see a girl, even during class.

“I ask the girls if they’ve experienced this, they all put their hands up including Years 7 and 8. This is common everywhere we go.”

Ms Tankard Reist, who is a media commentator and author, speaks regularly in schools with co-presenter Daniel Principe, addressing students, staff and parents about the harms of pornography. They were recently in Hobart to address Year 7 to 10 students at St Aloysius Catholic College in Huntingfield.

Following their presentation one female Year 8 student said, “It was honest and true and the way you worded it was so perfect.”

Another said, “Everything that we might have been afraid to say, you made it ok.”

A Year 10 female student commented, “I felt guilty for saying ‘no’ [to a boy] but now I know I don’t have to feel guilty.”

“They opened up the space for a wider discussion around the roles we all play in creating a safe, positive, respectful environment,” Ms Marriott said.

Executive Director of Catholic Education Tasmania, Dr Gerard Gaskin, said he was “deeply concerned” about “the growth of the use of pornography by all sectors of society”.

“Our Catholic Identity and Evangelisation Team is committed to helping all our students, in an age-appropriate manner, to comprehend and to resist the evil of pornography,” Dr Gaskin said.

“The programs offered to our Catholic schools by our marriage, family and relationships educators all support the healthy, natural sexual development and moral decision-making capacity for our students.”

“The work of the team is always challenging, sometimes confronting, but every necessary. I am pleased to say that this work is now underway in almost every one of our thirty-eight Archdiocesan schools.”

“Schools have a legal duty of care to provide a safe educational environment for students. Girls are being routinely harassed at school day after day. That is violating the school’s legal obligations and legal duty of care.”

Female staff at schools were also being subjected to harassment from male students, she said.

“They hate it, they don’t like it. It needs leadership and action from the top.”

“This is the biggest public health crisis our children are facing, far bigger than COVID,” Mr Principe said.

“We need a whole of community approach. We need everyone engaged, from the schools to the students, to the parents.”

Mr Principe who has completed postgraduate studies in media and public relations aims to help boys recognise they are being “preyed on by a billion-dollar industry that doesn’t have their best interests at heart”.

Referring to a recent report from the Australian Institute of Family Studies, he said the research clearly shows “if you consume pornography, you are more likely to be sexually violent”.

“We also look at what the research says, the harmful impacts of those objectified portrayals of women and girls everywhere.”

“Most importantly we look at what they can do about it collectively to change things.”