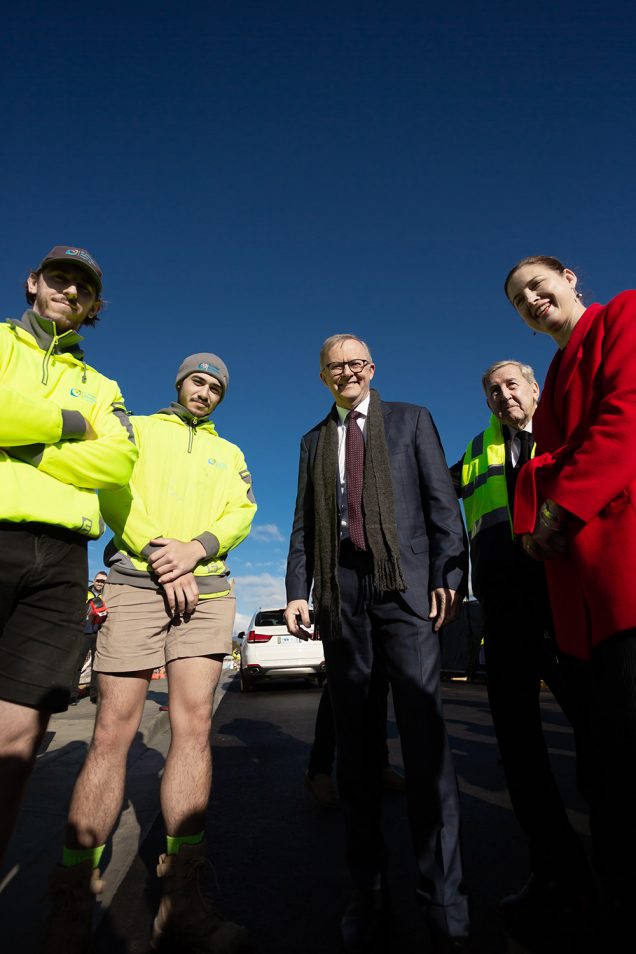 Prime Minister Anthony Albanese was a recent visitor to a new housing development in Bridgewater being built by Centacare Evolve Housing and St Joseph Affordable Homes.

The Prime Minister was joined by Federal Minister for Housing, Julie Collins, local Senators Carol Brown and Catryna Bilyk and Brighton City Council Mayor Leigh Gray on a tour of the site.

“I want to congratulate St Joseph Affordable Homes and the organisations associated with the Catholic community in bringing the housing development project to fruition.

Archbishop Julian said the work behind the housing project reflected Christ’s teaching in the Gospels.

“St Joseph Affordable Homes works very closely with all our social services so that we’re able to care for people.

“We are putting the Lord’s teachings in the Gospels into practice,” His Grace said.

“In this way we are living out our Christian faith and showing concern for our neighbour.”

“We have an enviable record of delivering social and affordable homes in partnership with all tiers of government,” Mr Wilson said.

Brighton Council Mayor Leigh Gray expressed his pride in the Brighton City Council and the foresight involved in donating land to Centacare Evolve Housing on which St Joseph Affordable Homes have been able to build dwellings.

“To master plan this particular area and have something of this quality in our municipality is just fantastic.

“We’re about getting houses built, and people into those houses to build a better community,” he said.

Employed by St Joseph Affordable Homes, bricklaying apprentice Izaiah Meni said he was fortunate to be involved in the project in Bridgewater.

“St Joseph’s do such an incredible job doing what they do helping families and all those in need, so it’s been really rewarding.”

Of the 54 homes being built at Taylor Crescent in Bridgewater, 30 are jointly funded by the Tasmanian State Government through the Community Housing Growth program in conjunction with Centacare Evolve Housing and 10 are being joint funded by the Federal Government under the Hobart City Deal.

The remaining 14 homes will be sold to first home buyers through the State Governments Shared equity scheme.