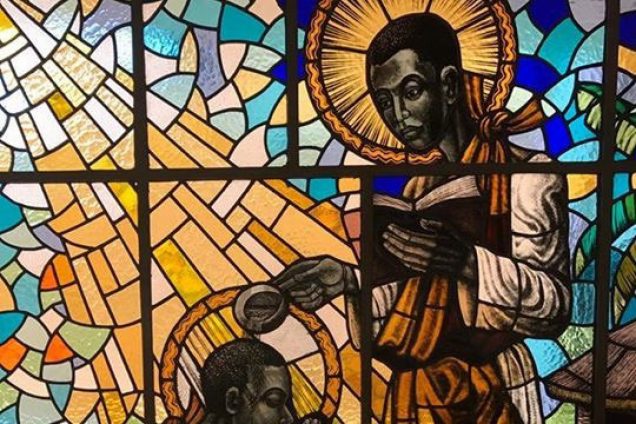 The stories of the Christian martyrs of Africa in the 19th century, such as those of St Charles Lwanga and his companions, are outstanding examples of heroic virtue in the face of brutal persecution.

By around 1880 Catholicism had gained many converts in Uganda due to the evangelising efforts of the White Fathers, an order of missionary priests founded by French cardinal, Charles Martial Allemand Lavigerie, primate of Africa.

The White Fathers had been tolerated in Uganda under the reign of King Mutesa. However, when Mutesa died his son Mwanga succeeded him, a violent man and a pedophile who would force himself on the boys and young men serving in the royal court.

Many of the young pages who served in the King’s court were catechumens preparing for baptism under the instruction of the White Fathers, including Charles Lwanga. Charles, who was 25 years old at the time, resisted the King’s sexual advances and protected the other boys from him.

When King Mwanga had the local Anglican bishop executed in 1885, the head page of the royal court, a young convert to Catholicism named Joseph Mukasa, rebuked the King for his crime. The King had Joseph beheaded.

In light of this brutal act, Charles and many of his fellow pages went to the White Fathers and requested to be baptised immediately. Around 100 catechumens were baptised following Joseph’s death.

In May 1886 the King ordered an assembly of all the royal pages where he demanded they renounce the Christian faith. Charles, who had been made head page after Joseph’s execution, led the other men and boys in bravely defying the King and refusing to give up their faith in Christ. Furious, the King condemned them to be executed.

The 15 men and boys, both Catholics and Anglicans, were made to march 37 miles to the place of their execution in Namugongo. Once there, Charles was separated from his companions and burnt alive on 3 June 1886.

As the flames burnt his body, Charles said to his executioners, “It is as if you are pouring water over me. Please repent and become a Christian like me.”

His friends were left tied together for seven days before they were burnt at the stake.

Today the Basilica of the Uganda Martyrs stands on the site their martyrdom. It is believed that under the reign of King Mwanga 100 Christians were killed.

Charles and his companions were canonised in 1964 and in 1927 the religious order of the Brothers of St Charles Lwanga was founded.