Learning to love through simplicity, silence, and solitude 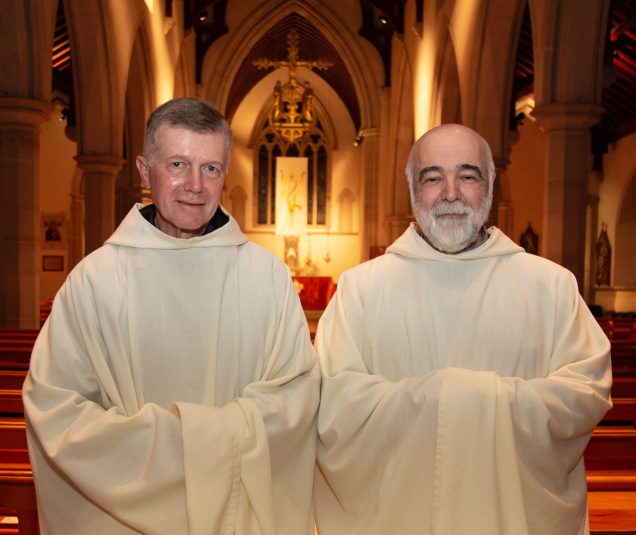 A rare event in the Catholic Church took place on the evening of 20 April at St Mary’s Cathedral in Hobart, as two men vowed to live as Canonical Hermits, seeking to live a life of prayer, penance and solitude dedicated entirely to God.

Dr Drasko Dizdar and Fr Chris Brennan pronounced their Canonical Hermit vows in the presence of Archbishop Julian Porteous during the consecration ceremony.

“Hermits can be found in the Church from its earliest days and have antecedents in the Scriptures, the prophet Elijah and St John the Baptist spring to mind,” Archbishop Julian said in his homily.

“It is not just withdrawal from human society to pursue personal holiness, it is to engage with the cosmic struggle for the redemption of the human race. Indeed, a hermit lives to advance the mission of the Church in the world, albeit chiefly at the spiritual level.”

Dr Dizdar, a lecturer in theology, said the life of a hermit was not about being cut off from others but rather about growing in love.

“The purpose of the eremitic life, of moving into ever greater silence, simplicity, and solitude, is so that you will grow in the love of God and neighbour—indeed all God’s creatures and creation itself in the Creator,” Dr Dizdar said.

As a form of consecrated life within the Church, Canonical Hermits commit to living the evangelical counsels of poverty, chastity, and obedience, as do monks, nuns, and religious brothers and sisters.

The “eremitic life” of a hermit however is the oldest form of religious life, and is more solitary and less structured than monastic life.

Two orders of hermits were formed in the eleventh century—the Carthusians and the less well-known Camaldolese. In the following centuries some individuals living Benedictine, Franciscan or Carmelite spirituality also desired to live the more solitary life of a hermit.

In the Church’s Canon Law, the eremitical way of life is recognised as a life devoted to the praise of God and the salvation of the world through “a stricter withdrawal from the world, the silence of solitude and assiduous prayer and penance”.

Furthermore, a hermit is required to publicly profess before a bishop to live the vows of poverty, chastity and obedience, and to observe a program of living under the bishop’s direction.

As a priest-hermit, Fr Brennan, originally from Queensland, was incardinated in the Archdiocese of Hobart.

“By consecration as a canonical hermit, I hope to live the priesthood and the eremitic life of prayer, study, and work in ever greater simplicity and in ever greater attunement to the Lord in solitude and silence,” Fr Brennan said.

“In doing this, I hope that this will benefit Christ’s Church, and through the Church, the world.”

Dr Dizdar said the life of a hermit was sharply focused on “God alone”.

“It is a wholehearted and single-minded way of life that seeks to love and live in God above all else,” he said.

“It is, therefore, a radically paradoxical life because as a hermit you are never alone. You are always in and with God; and aim to be so as consciously and practically as possible through a life of prayerful presence.

“You are in deepest communion with all other beings, human and otherwise. Real hermits are the least lonely human beings imaginable.”