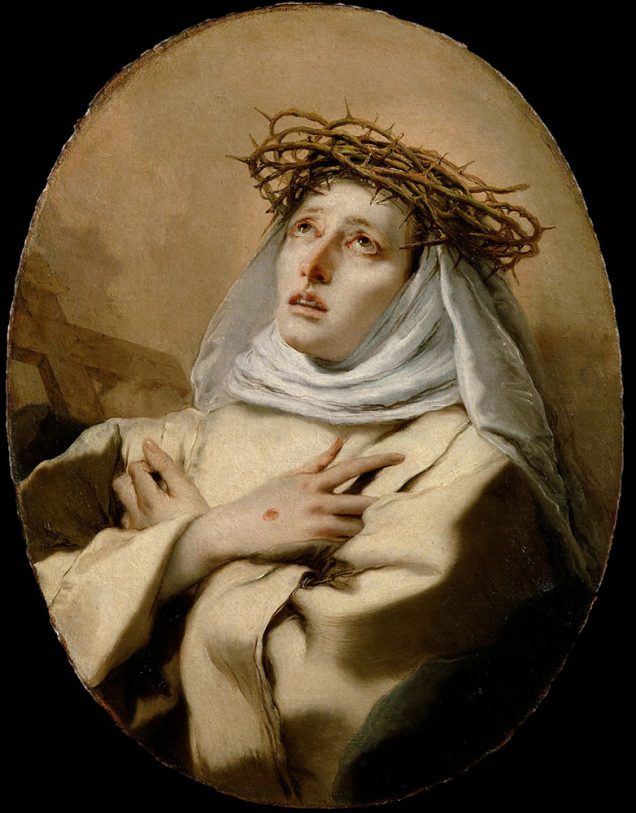 St Catherine of Siena is one of the most enigmatic and extraordinary saints. She was a mystic completely dedicated to serving God through a life of prayer and penance. Yet she was also deeply involved in Church and civil politics, acting as a peacemaker between feuding principalities in Italy, and even advising the Pope himself. This was an extraordinary feat, since, like many girls in 14th century Europe, Catherine received no formal education.

Born in Siena, Italy, on 25 March 1347, Catherine was one of 25 children born to her parents Jacopo and Lapa Benincasa. When she was only seven she had a vision of Christ the King seated upon a throne and surrounded by saints.

When she was 16 her parents began pressuring her to marry, however she refused, cutting off her hair, and spending most of her time in her room praying and fasting. After much dispute, her parents finally relented, allowing Catherine to live as she pleased.

She became a member of the Third Order of St Dominic and spent a great deal of time serving the poor people of Siena. She became well known because of her strong personality and her mystical experiences. It is said she would often enter into an ecstatic, trance-like state after receiving Holy Communion.

Catherine travelled around Italy with a band of followers, seeking reform within the Church and preaching repentance. She dictated numerous letters to people in authority urging peace between warring regions in Italy. She also acted as an ambassador between the Republic of Florence and the Papal States.

In 1375 Catherine received the stigmata, the physical wounds of the crucified Christ, in her own body.

After a lengthy correspondence with Pope Gregory XI, Catherine visited him in 1376 in Avignon, France, where he resided, and advised him to return the Papacy to Rome. The Papacy had been seated in Avignon, since 1309 following a dispute with the French monarchy. Not long after this visit from Catherine, the Pope returned to Rome in January 1377.

Catherine died at the age of thirty-three on 29 April 1380. It is said that she was exhausted after years of travel and extreme fasting and penance, and had suffered a stroke prior to her death.

In 1970 Catherine became one of the first female saints, along with St Teresa of Avila, to be declared a Doctor of the Church. She is co-patron saint of Italy and Europe.