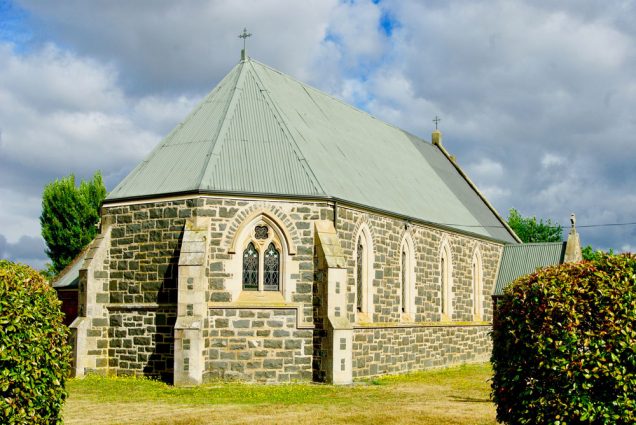 The foundation stone for the first Catholic Church of St Augustine in Longford was laid on 6 June 1866.

According to the Cornwall Chronicle:

“There was a large concourse of persons – nearly five hundred present – many of them visitors from Launceston and the surrounding townships.”

Despite this promising start, it was to be another year and a half before the building was completed.

In 1867, The Tasmanian Catholic Standard reported progress in building the new church had come to a halt. A lack of funds had meant that the roof could not be completed. It was not long, however, before Father John Butler, a driving force in the project, had building work recommenced.

The Cornwall Chronicle reported in August 1867:

“We have been much delighted with the efforts made by the zealous pastor Father Butler, and the Catholics of this district, towards the erection of a church. Their efforts have been so far satisfactorily recompensed in a building as beautifully situated for convenience to the people as it is remarkable for its architectural neatness and durability.

“There is no want of a generous feeling so characteristic of our people in all parts, but the pressure is too much upon generally limited circumstances to meet the constant demands of a rather expensive building. This is a work which deserves our sympathy, and we hope that the appeal now made to the public through the medium of a bazaar will be cheerfully responded to, and that the sum realised will enable the Pastor to liquidate all debts incurred during the course of its erection.”.

The bazaar and associated fundraising were clearly a success, for the next report we have is of the church’s opening in November 1867:

“This ceremony commenced by the recital of a prayer outside the door; after which the procession moved round the Church reciting the 50th Psalm while the walls were being sprinkled with water blessed for the purpose. The choir of the Church of the Apostles, under the guidance of their talented and able organist, Mr McIvor, rendered the musical pieces with artistic taste and thrilling effect during the Mass. “

The church was subsequently completed, mainly due to the efforts of Father John McKernan, who served as priest at St Augustine for 31 years. He is honoured with the only memorial gravestone within the churchyard.  His death was reported widely in newspapers across Tasmania, indicative of his popularity and influence in the Catholic Church.