Christian witness on the battlefield 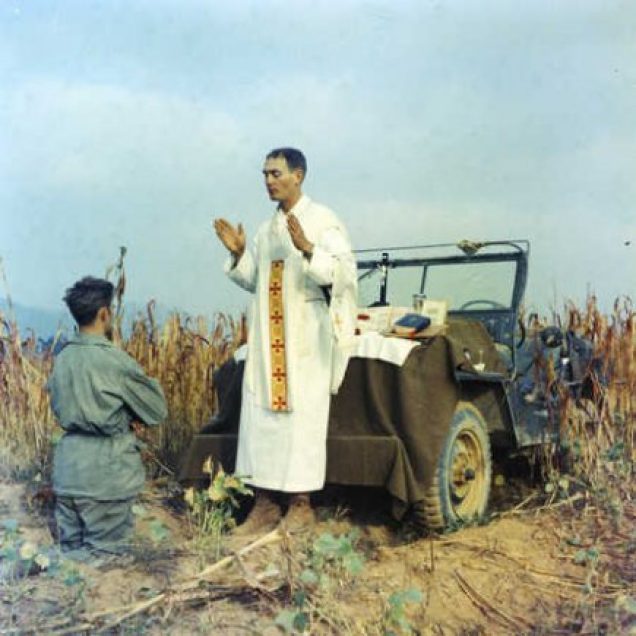 By Ben Smith, Director of the Office for Justice and Peace

In these times of military conflict, we need some inspiration from heroes of humanity. One such inspirational person is Fr Emil Kapaun, a US army chaplain during the Korean War. Fr Kapaun’s work earnt him a posthumous Congressional Medal of Honour in 2013 that was presented to his nephew by President Barrack Obama. He was named a Servant of God by Pope St John Paul II in 1993 and his cause for sainthood is currently being considered by the Congregation of Saints in Rome.

He showed his true value as the Chinese Communist forces were surrounding Fr Kapaun’s unit in November 1950. He courageously ventured into no-man’s land through enemy fire, to provide comfort and medical aid to his comrades and rescue the wounded. After his unit’s capture, he bravely pushed aside an enemy soldier preparing to execute a US soldier to save his life. During a 60-mile-long march to a POW camp in North Korea he tirelessly helped carry the wounded. While in the camp, he supported his fellow prisoners by foraging for food at night, washing their clothes, picked lice off sick men, helped nurse sick soldiers back to health and provided encouragement in prayer and humour despite his own declining health.

Fr Kapaun, against the wishes of his captors, celebrated an Easter Sunday dawn service for men of all faiths and no faith at all. He raised a small, homemade, wooden cross and led the men in the glorious mysteries of the Rosary, heard the confessions of the Catholics and performed a baptism. The theme of his sermon was the crucifixion of Christ that spoke to the soldiers own recent suffering.

A few weeks later in May, Fr Kapaun’s health took a turn for the worse and he was taken to the camp hospital. Those that left him there witnessed Fr Kapaun praying for the Chinese soldiers working at the hospital: “Father, forgive them, for they do not know what they are doing.” A few days later he died.

Fr Kapaun’s example of self-sacrifice and forgiveness reminds us of the passion and death of Jesus. We pray that military chaplains on the ground in Ukraine can inspire troops on both sides to act with dignity, a spirit of service and forgiveness. May the joy of the Resurrection radiate across the battlefields of Ukraine so that life and peace will reign over death and destruction.