A TASTE OF HEAVEN: A sweet treat for Easter 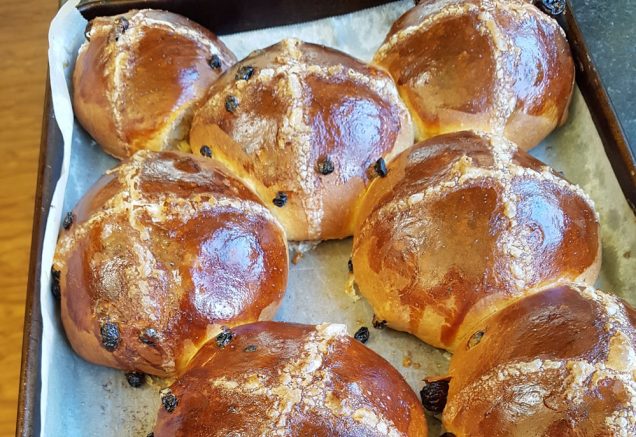 After the restraint of Lent we come to the wonderfully indulgent Easter times.

A 14th century monk of St Albans parish in Hertfordshire, England, Br Thomas Rocliffe, is credited with inventing the hot cross bun. The sweet fruity bun was given to the poor folk on Good Friday to mark the end of Lent. Originally the cross was cut into the top of the bun, nowadays it’s piped on, to signify the Cross of Christ.

In earlier times the Saxons did have a sweet bread that signified the four seasons, it was probably flavoured with honey in those times.

Baking these buns is such a treat. The traditional recipe doesn’t have chocolate or any other flavourings, but once mastered you may decide to add your own touch. The dough is like a brioche recipe, so without the spices and fruit you can make your own brioche buns which are great for homemade burgers etc., just remember to reduce the sugar.

Or you can make your own fruit loaf by baking it in a loaf tin. For this I would increase cooking time to 40-45 minutes.

Add yeast and 1 tblsp of sugar to the water and mix, allow to activate for 10 minutes. Put all other ingredients into a mixing bowl and combine with the water mix. Stir together with a spoon until combined then let stand for 5 minutes. Turn dough out onto a lightly floured bench and knead for 5 minutes. Allow to prove in a warm place for 30 minutes, then turn out and knead for 3 minutes.

Form into balls of 100-120 grams (depending on how big a bun you want) and place on a baking tray. Allow to prove until not quite doubled in volume. Mix the egg whites with a tsp of icing sugar and lightly beat to combine. Brush the top of the buns with this mixture, then pipe on crosses with the sugar paste.

Bake in a 180C oven for 20 minutes, slather a halved bun with butter and eat!