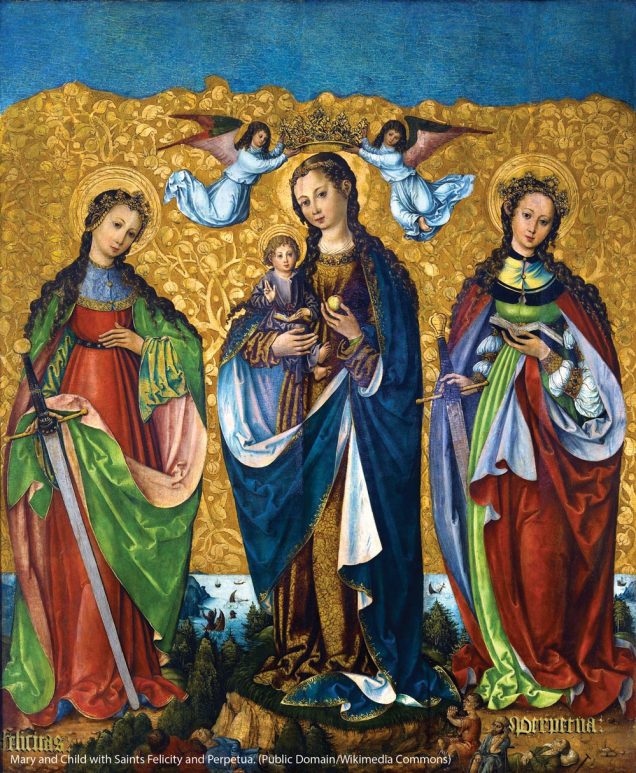 The names of Saints Perpetua and Felicity would be familiar to many Catholics because they are mentioned in the Eucharistic Prayer of the Mass, along with five other female martyrs—Agatha, Lucy, Agnes, Cecilia and Anastasia.

Although their story seems to have fallen by the wayside in recent times, in the early centuries of the Church Perpetua and Felicity were extremely popular amongst the faithful and highly venerated.

Both were young Christian mothers, martyred for their faith by the Roman authorities in 203 AD in Carthage, Africa.

We actually know a fair amount of detail about what happened to the two women because Perpetua wrote a diary, known today as The Passion of Saints Perpetua and Felicity.

Perpetua was only 22 years of age when she was killed. She was an educated noblewoman, recently married, and still nursing her infant son at the time of her execution.

Felicity was a slave captured and imprisoned along with Perpetua and other Catechumens who were preparing for baptism. She was pregnant at the time and gave birth to her child only days before she was martyred.

Perpetua wrote in her diary that following her arrest she had an argument with her father, who was a pagan and feared for his daughter’s life.

When her father asked her to renounce the name of “Christian” she pointed to a nearby water jar and asked him if it were possible to refer to it as anything other than what it was. When he responded that it was not possible, she said, “Well, in the same way I cannot be called by any other name than what I am—a Christian.”

Felicity gave birth to a baby girl just days before her execution. She had a painful labour and was heard crying out in pain. When one of the prison guards taunted her, asking how she would endure her impending martyrdom, she replied, ‘What I am suffering now, I suffer by myself. But then another will be inside me who will suffer for me, just as I shall be suffering for him.’

They are the patron saints of mothers, expectant mothers, ranchers and butchers.