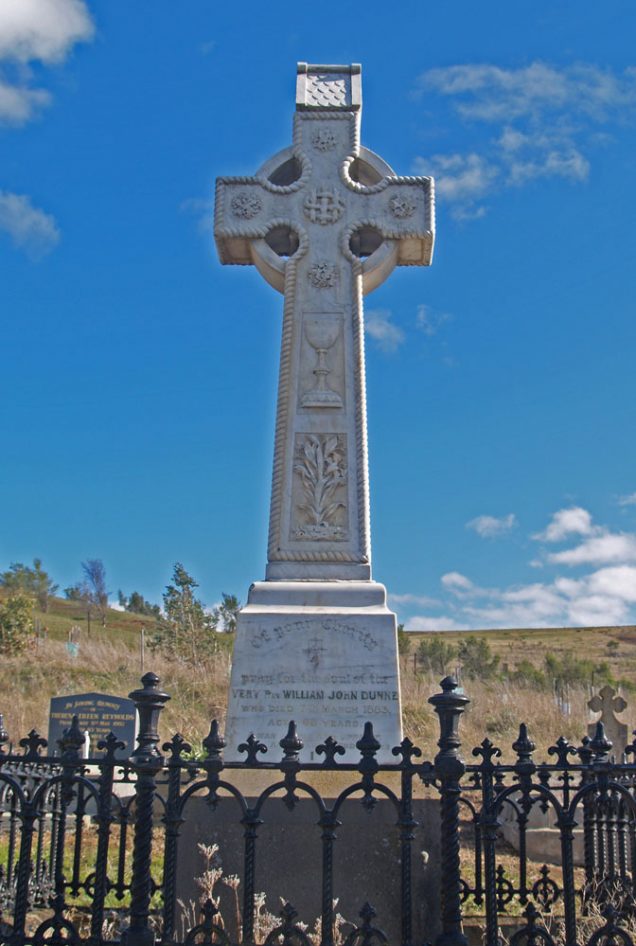 Travellers passing through the Southern Midlands village of Colebrook cannot fail to note Pugin’s splendid Church of St Patrick with its historic cemetery on the hillside at the edge of the settlement. Dominating the cemetery is a particularly fine marble Celtic cross which stands above the grave of Fr William Dunne, the Richmond pastor who built the church between 1855 and 1857.

Having spent most of his priestly life in Tasmania, Fr Dunne ended his working days in charge of Coburg Parish in Melbourne, Victoria. He had expressed a wish to be buried in Colebrook alongside the church he greatly loved, so after his death his mortal remains were brought back to Tasmania. Following his funeral in St Joseph’s, Hobart, on 15 March 1883, a procession of some two thousand people followed the hearse to the railway station. A special train with around two hundred and fifty mourners conveyed his remains to Colebrook, hundreds lining the high ground of the Hobart Domain to wave their farewell. Upon its arrival, the hearse was drawn up the hill to St Patrick’s by twenty strong young men of the district. Around four hundred people gathered around the graveside for his interment.

Fr Dunne must have arranged for the entire monument to be manufactured out of his considerable private means while he was stationed at Coburg, because it is entirely of Victorian origin. The elegantly-designed Celtic cross was carved in Melbourne, records indicating that the Hobart architect Henry Hunter applied to have it admitted to the Colony of Tasmania free of customs duty. The wrought iron railing surrounding the plot was manufactured by the Brunswick Foundry in Melbourne, which lay within Fr Dunne’s parish, and both the cross plinth and the base supporting the railing were constructed of basalt quarried in Victoria.

It is worth mentioning that Fr Dunne bequeathed the majority of his estate for the establishment of a Good Shepherd home in Hobart. This enabled his executors to purchase an eleven-hectare site in Lower Sandy Bay upon which was built Mount St Canice, named after the patron saint of Kilkenny, birthplace of Fr Dunne.