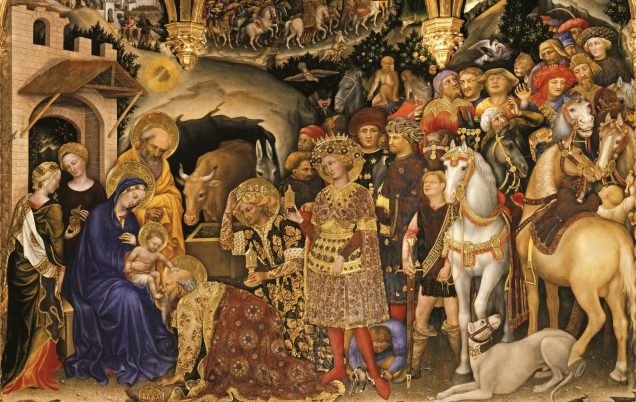 Epiphany humour, as it were, suggests that had it been three wise women following the star to the manger, they would have asked for directions, arrived on time, helped deliver the baby, cleaned the stable, made a casserole and most importantly brought with them practical gifts.

The visit of Matthew’s wise men from the East, or Magi, lies at the heart of our own gift-giving traditions at Christmas with some cultures even exchanging gifts on the 12th day of Christmas or feast of the Epiphany rather than Christmas day. Matthew’s Gospel records the Magi worshipped the Christ child and endowed him from each of their treasures a gift (Mt 2:11). Saint Irenaeus suggests that the gifts help us access the mystery of the Incarnate Word: gold, a symbol of royalty, represents his kingship; frankincense, used in worship, points to his divinity; and myrrh represents his humanity, particularly in his passion and death.

By these mystical gifts the wise men preached Him whom they adored. In presenting gold and frankincense, the Magi would evoke the prophet Isaiah: “And nations shall come to your light, and kings to the brightness of your rising” … They shall bring gold and frankincense, and shall proclaim the praise of the Lord.” In gifting the balm myrrh, used as a burial ointment and also to consecrate Levitical priests and the wilderness tabernacle, they portend the priesthood of the child and his manifesting the new Temple which John later recalls will be “raised up in three days” (Jn 2:18).

G K Chesterton observed of the gifts that they prefigured and promised three things about the Christ child; “that He would be crowned like a King; that He should be worshipped like a God; and that He should die like a man”, noting that, “these things would sound like Eastern flattery, were it not for the third.”

That popular Christmas song “The Little Drummer Boy” relates how a poor young boy summoned by the Magi to the Nativity of Jesus, and having no gift worthy of a king, plays his drum with all his heart as best he can. It begs the question what might we bring as gifts to the Christ child this Christmas?

Pope Saint Gregory the Great commends that we should bring the same three gifts as the Magi. So, let us bring the gold of Christ’s wisdom in our lives; frankincense’s sweet savour in our prayers and adoration; and the myrrh of self-sacrifice, forsaking the worldly and instead choosing Christ. Practical gifts offered like the drummer boy with all our heart and as best we can, with joy and thanksgiving to God.

Wishing you the Lord’s Joy and Peace this Christmas!