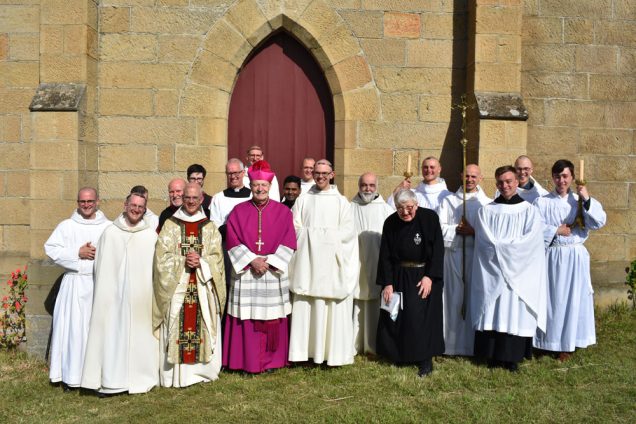 Twenty-nine-year-old Br Bede Mary Cannavo OSB has made his Solemn Profession as a Benedictine monk, making him the first monk to proceed to final vows in his community at Colebrook, in Tasmania’s Central region.

On 8 December, the feast of the Immaculate Conception of the Blessed Virgin Mary, Br Bede professed his final vows in front of his Benedictine community, and family and friends, at St Patrick’s Church in Colebrook.

“The main thought that went through my mind is that ‘today is the first day of the rest of my life, lived totally for God’, and that gave me great solace as I pronounced my vows,” he told the Catholic Standard.

“I was a little nervous, admittedly, but Our Lady obtained for me the grace of true calm when the time came. The most moving part for me remains the singing of the triple Suscipe – ‘Uphold me, O Lord, according to thy word, and I shall live: and let me not be confounded in my expectation’ (Ps. 118).”

The Solemn Profession and Monastic Consecration took place within the celebration of the Extraordinary Form of the Mass, presided over by Prior of the monastery, Fr Pius Mary Noonan OSB.

Archbishop Julian, who had originally invited the monks to found a community in Tasmania, also participated in the liturgy.

After vowing to live the evangelical counsels of poverty, chastity and obedience, Br Bede lay prostrate before the altar, as a sign of the complete surrender to God.

“That prostration is like a mystical death, by which you profess that the world, with all its beauty, is not big enough for your heart, God alone can fill it,” Fr Noonan said in his homily.

Br Bede was then clothed in the white habit of a Benedictine monk, known as the “monastic cuculla”.

“It is white because we place ourselves under the special protection of our spotless Mother,” Fr Noonan said.

Br Bede is the first member of the current community at Notre Dame to make his Solemn Profession, which is the taking of religious vows for life.

Fr Noonan spoke of the radical and counter-cultural nature of religious life.

“The vow of chastity in a world given over to hedonism is a statement that the love of God is greater and better and more fulfilling than even the most natural of human desires,” he said.

Those, like Br Bede, prepared to take up the challenge of religious life are a sign of hope, he said.

“Today we find ourselves in a spiritual desert. And yet, flowers can grow in the desert. Oases can be created there.

“A world without God is a world of slavery and darkness. We pray that you, dear Brother, may truly be a light in the present darkness, a flower in the desert, an oasis in which first God and then men may come to refresh themselves.”

“As dark clouds amass on the horizon of our world, and as we look back to the historical circumstances in which St Benedict himself started this adventure, we know that monasteries have always played a role in the evangelisation of the countries they find themselves in.

“And so, we are allowed to nurture the hope that in time this small community may make a substantial contribution to the spreading of all that is truly good and holy throughout Tasmania, but also throughout all Australia.”

He also acknowledged the role of Archbishop Julian in bringing the monks to Tasmania.

“If we are here on this island, it is thanks to the fatherly welcome and support of Archbishop Julian.”

Archbishop Julian said he was delighted by the occasion of Br Bede’s final profession.

“This is a wonderful day for this community, to see the first monk solemnly professed,” he said.

Currently there are nine members of the monastic community at Notre Dame Priory including the Prior Fr Noonan, the newly-professed Br Bede, four monks under temporary vows, two novices and one postulant.

Br Bede has been a member of the community since its foundation in 2017, entering at the young age of 24, attracted by the peacefulness of the Benedictine way of life.

Born and raised in Adelaide, he first started thinking seriously about monastic life after visiting a Benedictine monastery while studying in France.

“It was the combination of the peace and order, and the solemn celebration of the liturgy. That’s a pretty big part of Benedictine life, the focus on liturgical prayer,” Br Bede said.

“It was just the peace and the order that sort of struck me, and it was just a sense of ‘This is what I’ve been searching for’.”

Benedictine life is centred around prayer and work. The monks pray the Liturgy of the Hours, coming together in prayer seven times throughout the day, beginning at 4am, and concluding at 7pm.

Silence is also an important component of Benedictine monastic life. Br Bede said in his community silence is kept at all times excluding recreation times.

When they are not praying or enjoying some recreation, the monks spend time either studying or engaged in various forms of work. Br Bede said there is plenty of manual work to be done each day on the community’s 1100 hectare property.

“Whatever the work might be, it’s a sort of healthy human balance between prayer and work, a life completely consecrated to God no matter what you’re doing.

“Benedictine life has been around for 1500 years, and it’s pretty much the same now as it was when St Benedict founded it.”

Br Bede said he believes that more than ever the world needs those who dedicate themselves entirely to God.

“The way the world is going at the moment, it’s pretty clear that divine aid is the solution.”

“We live in a society and a world where God is considered irrelevant, he doesn’t exist, and the witness of men and women who give their lives to God and who live a radical form of life which has no other purpose than praising God, I think is very powerful.”