Power of prayer at public Rosary Chain event in Launceston 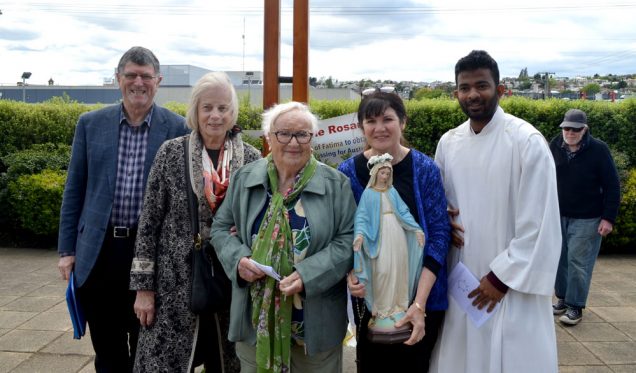 The haunting strains of “Immaculate Mary”, the opening hymn at the public Rosary in Launceston on 16 October, stopped passers-by in their tracks.

It set the scene for what organisers described as a beautiful event as about 50 people gathered with stools and deck chairs in the shade of the giant wooden cross next to the imposing Church of the Apostles.

It was the sixth year in a row that Launceston has hosted a public rosary event as part of a nationwide Rosary Chain.

The first four years were in City Park, but COVID-19 restrictions prompted the move to the church grounds in 2020 and 2021.

The Rosary holds special significance for organiser Mary Siejka, 91, originally from Poland, who was in a labour camp in Germany for three years during World War II.

Amidst the hardship and hunger, the Rosary helped sustain her through those desperate times.

Mrs Siejka explained: “We did not go out. We could not go to church, so we got together and we prayed the Rosary. It remains central to my Catholic faith.”

Mrs Siejka, of Launceston, said the public Rosary this year was beautiful and she was pleased the weather stayed fine.

“The public Rosary is important because if we are outside, non-Catholics will see and ask what this is all about,” she added.

“This year, up to 300 groups around Australia were all praying the Rosary at the same time.”

Launceston Parish assistant priest, Fr Chathura Silva, thanked the organisers and all who attended and took the powerful opportunity to pray for intercessions.

Patrick Fleming was the master of ceremonies with Mary Sexton as soloist and Janet Hoare ringing the church bells at the end.

The public Rosary is an international campaign held to coincide with the anniversary of the last apparition of Our Lady at Fatima on 13 October, 1917. In 2020, some 180 groups registered to pray the Rosary throughout Australia.

​​The event is promoted by a lay Catholic group called Australia Needs Fatima. The group believes in the importance of a public witness of faith, public reparation, seeking God’s merciful blessings for Australia and its people, and the power of public prayer.