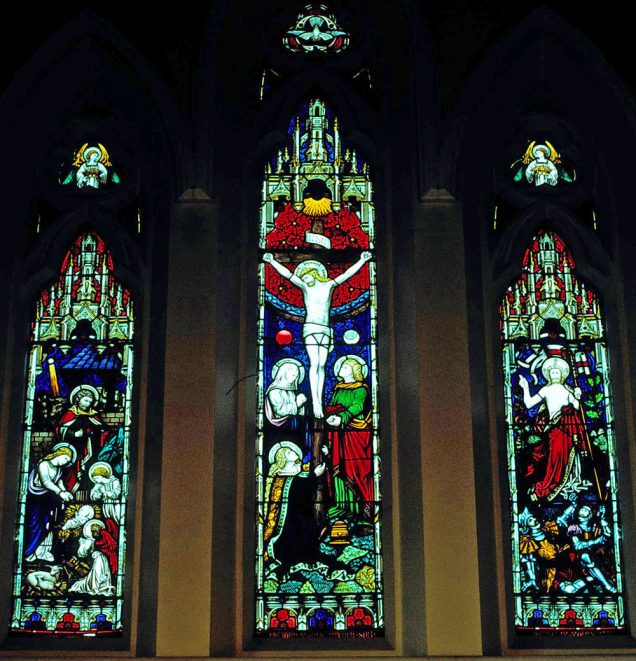 The liturgical east window in Sacred Heart Church, New Town, depicting the Nativity, the Crucifixion and the Resurrection, was manufactured in 1881 by the Sydney stained-glass firm of Falconer and Ashwin for the sum of £100. It was installed in the church as part of the construction of the chancel, which was blessed and opened on 15 January 1882. This construction completed Henry Hunter’s 1878 design for the building. Commenting on the opening ceremonies, the Hobart Mercury observed that: “The window is noticeable for the richness of its colours, and is a feature of the building of which its congregation has reason to be proud.”

Aside from that imported from England, and occasionally Germany, most nineteenth and early twentieth-century stained glass installed in Tasmanian buildings—predominantly churches—came from Victorian manufacturers; initially Ferguson and Urie, then William Montgomery and also the firm of Brooks Robinson & Co. Works by Falconer and Ashwin are exceedingly rare in Tasmania, that in Sacred Heart, New Town, being the only example in a Catholic church.

The firm of Falconer and Ashwin was formed c.1873 when John Falconer (1838–91), a Scot who had opened a stained-glass studio in Sydney in about 1863, entered into partnership with Frederick Ashwin (1835–1909), newly arrived from England where he had trained with perhaps the most influential of the traditional English firms, that of James Powell and Sons of Whitefriars’, London. Falconer himself was no mean artist, said to have prepared, when in London, a stained window for Kensington Museum (the present-day Victoria & Albert Museum, South Kensington, arguably the greatest decorative arts museum in the world).

The New Town window is thus a relatively early example of the work of an important Australian firm that continued on from 1910 as John Ashwin & Co., under the artistic direction of the Polish migrant John Radecki (1866–1955), until 1954.