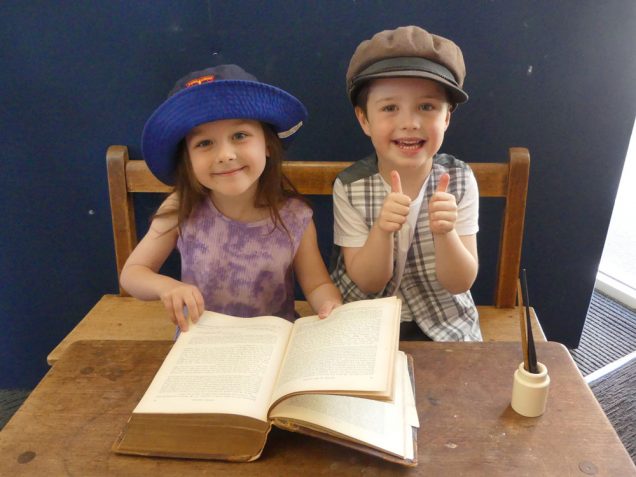 It has been 90 years since the Sisters of St Joseph first visited families in the newly founded St Therese’s Parish Moonah to seek enrolments for the school in the church hall. On 25 October 1931, the foundation stone of the new parish was laid by Archdiocesan Administrator, Very Rev D Murphy, and the first Parish Priest, Fr T J O’Donnell.

This year, to celebrate their 90th anniversary, the current students of St Therese’s Catholic School, along with staff, parishioners and past students, remembered those humble beginnings with a heart-warming display of the community spirit that has served the parish school so well over the years.

Principal Fran Baccarin said the school marked the momentous occasion with “a lot of fun and big events”, including a dress up day, historical displays and presentations, and activities from the past.

“On the Wednesday we had a step back in time history day,” she explained.

“We started the day with a 1930’s fashion parade and class photo, and then practiced some marching around the oval, because that was something that was very well known. After that we had old-fashioned games like skipping, elastics, quoits, stilts, bingo games and hopscotch.”

Ms Baccarin said the students spent time exploring a combined school and parish history display in the hall, which featured photos and memorabilia as well as an old-fashioned school corner, with desks for the children to sit at, quills for writing and old books.

“Hopefully it gave them a little taste of what life was like back when the school first started and gave them a concept of time and history,” she said.

“A lot of our young students don’t understand that concept very well, and so just being immersed in the experience was positive for them to know a little bit about what school was like here and how life was different 90 years ago.”

Ms Baccarin said it was fascinating to consider how the delivery of education had changed over the years.

“When school started here it was in what is our current hall, and they had one or two teachers with a lot of children – classes were probably close to 50 – and everyone sat in straight rows and did what they were asked to do,” she said.

“I am also the first female lay principal in the school’s history. Before me, the last female principal was Sr Carmel Jones, and we read the homily together at our celebration Mass,” she said.

During her reflections, Sr Carmel remembered her appointment as Grade 3/4 teacher at the school in 1974.

“It was my first teaching appointment after completing my teacher training and I remember feeling very blessed with my group of students,” she said.

“Looking back now, I realise my classroom was probably fairly basic but there was a caring atmosphere in the school and I enjoyed planning and teaching and trying to be a bit creative with the curriculum.”

As student numbers increased, Sr Carmel recalled that correcting Maths Mastery books seemed to take up much of her evenings, and that art lessons were a lot of fun but the classroom never quite got cleaned up before it was time for the end of day bell.

“I enjoyed these two years – fulltime in the classroom, teaching all subjects, lots of hard work, involvement in parish life and overall much laughter,” she said.

When Sr Carmel returned to St Therese’s in 1985, it was a very different school.

“By now there were specialist teachers, a library, administration staff and I was the Principal,” she said.

Over the next few years, the school also underwent a major building project providing a new Grade 6 classroom, canteen, toilet block and enclosed assembly area as well as refurbished classrooms.

Sr Carmel fondly recalled being at the school on the day it snowed in Hobart in 1986.

“Snow started falling on the Thursday evening as I returned to the Convent after a Parish Council meeting in the presbytery but, by next morning, Hobart was shut down with the biggest snowfall that most people could remember,” she said.

“Only four students came to school and they had a lovely time building a snowman and enjoying the novelty of snow before the afternoon sun melted it away.”

Sr Carmel said during her time as Principal, she remembered not only working hard to get better educational facilities but also the many faces of the community – staff, students, parents, parishioners.

“It was the spirit of the community around me that meant so much to me at the time – and continues to touch my memories today,” she said.

Ms Baccarin agreed, saying the school was still strongly connected to the parish and to the Sisters of St Joseph.

“The school is very much a caring community with high levels of pastoral care and I think that has always been present,” she said.

“Mary MacKillop said we should never see a need without doing something about it, and I think that is very much present and alive today.”

Sister Colleen Power, a student at St Therese’s School during its first years, said she began her schooling in Grade 1A wearing a navy-blue school uniform, complete with hat, gloves and a school case.

“The church and school were one building – during the week it was divided into five classrooms by floor to ceiling wooden partitions which were attached to the walls and had to be moved into place for the school week,” she said.

“Our desks were the church pews. When I think back to the moving and reorganisation that the Sisters had to do each weekend, I am full of admiration.”

Sr Colleen said back then there were no lay staff, only Sisters.

“They were the class teachers, music teachers, playground supervisor, the ones who prepared the children for the sacraments, but above all they cared about the children,” she said.

Parish priest Father Krish Mathavan said the 90th anniversary was a great milestone to celebrate how far the community had come, and look back on history – “especially the parishioners, religious and priests who have served here and helped to grow this community in that time.”

“It also helps us to look forward as a multi-cultural parish community on where we can go from here, with gratitude and continued trust in God’s providence,” he said.

Fr Krish said the close relationship between the school and parish was a wonderful thing to behold.

“I continue to be moved by how the parish-school evolved from humble beginnings and people’s generosity 90 years ago, and how each priest and religious at the right time and place used their gifts and took the opportunities that came their way to build community to grow the parish and school to where we are today,” he said.

On the weekend of the anniversary on 24 October, the parish held a single combined mass for the whole community to gather to celebrate.

“A good crowd (English and Polish speaking parishioners) gathered at the start to wish each other a happy 90th anniversary,” Fr Krish said.

“There were the regulars, but also in attendance were those who had a connection with the parish in the past, those who grew up here and came back especially. There were readings and songs in both Polish and English, (two were a blast from the past, sung 90 years ago at the laying of the foundation stone), but what made the celebration most memorable was a special edited video of an interview with a few ‘seasoned’ parishioners reflecting on their experience of the parish.”