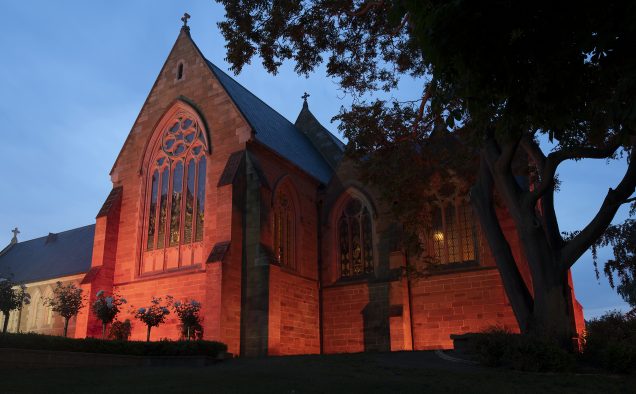 On the evening of 24 November cathedrals and churches around the world, including St Mary’s Cathedral in Hobart, will be bathed in red light to raise awareness of the persecution of Christians. In its sixth year, Red Wednesday is an initiative of international Catholic charity, Aid to the Church in Need (ACN), and seeks to bring to people’s attention the plight of Christians around the world, who face discrimination and persecution because of their faith.

On the same night there will be a prayer service at St Mary’s Cathedral beginning at 7pm presided over by Archbishop Julian, followed by testimonies from people who have experienced religious persecution in their countries of origin.

“The intention is to show our solidarity with those suffering persecution and to pray for them,” Archbishop Julian said.

ACN’s latest report on the current global situation, shows that two-thirds of people around the world live in countries where religious freedom is seriously violated, with 42 percent of African countries affected. This year, the Red Wednesday international campaign will focus on the persecution of Christian women and girls who suffer abduction, forced marriage, forced conversion and sexual violence in many countries.

“Red Wednesday joins us to those who suffer for their love of Christ,” ACN Australia’s National Director, Bernard Toutounji, told the Catholic Standard.

“Through our baptism all believers are made one body in Christ and therefore the difficulties experienced by our fellow Christians in living their faith should not be far from our minds and hearts,” he added.

ACN is encouraging parishes and schools to get involved with Red Wednesday this year, with a variety of possible ways to participate. One such initiative is called “Go to Mass for someone who can’t”, which invites students to attend an additional Mass during November to pray for those unable to go to Mass because of persecution. According to ACN, the #go2mass initiative has proved popular already, with an “enthusiastic uptake” of the activity by students.

“As we head towards Advent and Christmas, taking a moment to reflect on suffering and persecuted Christians is a very good way to prepare our hearts,” Mr Toutounji said.

“Let us not forget that on the day immediately following Christmas, the Church commemorates the feast of St Stephen, the first martyr. The Church is very clear, to follow the Lord is to take up the cross and I might add to help carry the crosses of others. That is why Red Wednesday exists.”

For more info on Red Wednesday go to: www.aidtochurch.org/redwednesday