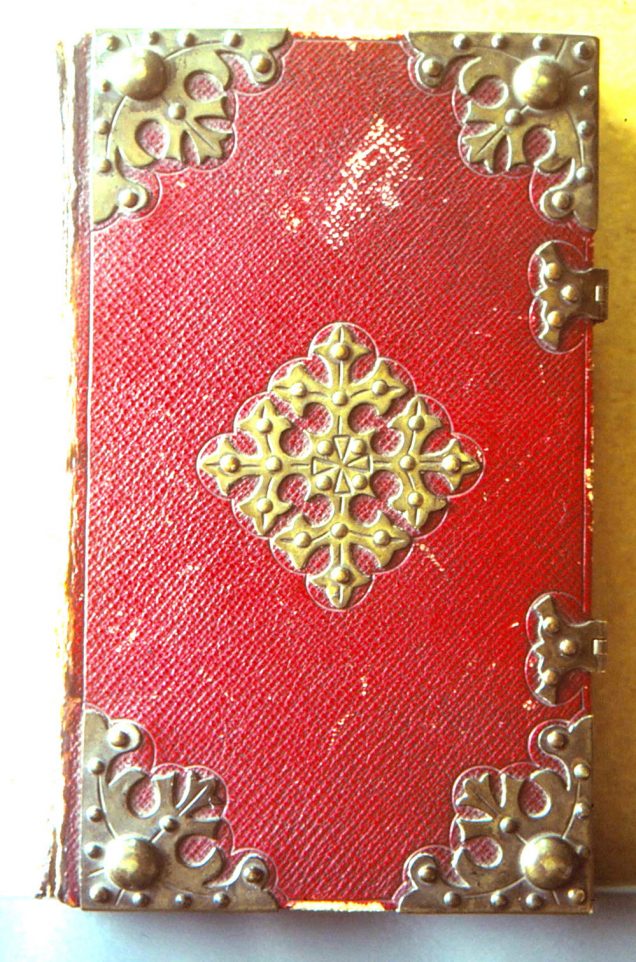 In 1964, a providential gift in the form of an old missal was presented to Archbishop Guilford Young from the staff of Chevalier College, Bowral, as a token of appreciation of the kindnesses he had shown to them during a recent school visit to Hobart. Doubtless chosen because of the dedication inside the front cover, the precious book had somehow finished up in the Southern Highlands of New South Wales at some point in the preceding 100 years, for reasons as yet unknown. The dedication read: “To Thomas Close Esquire, from his sincerely attached and affectionate friend, R.W. Willson, Bishop of Hobarton. Nottingham, 14th January 1844.”This date would indicate that the gift was made on the eve of Willson’s departure from Nottingham for Hobart. The missal had clearly been specially made for Willson, probably by his friend Pugin, for it was most richly ornamented and illustrated, and its metal mounts and closures were the same as Pugin had designed for his personal copy of his Designs for Iron and Brasswork of 1836.

Thomas Close, a Nottingham magistrate and a Protestant, was indeed a very close friend of Willson. That friendship is a measure of the unique standing which Willson enjoyed amongst all people as a result of his unstinting humanitarian activities on behalf of all regardless of creed or circumstance, a standing which would endure for as long as he labored in both England and Tasmania.

On the occasion of Willson’s episcopal consecration in October 1842, Close gave the new Bishop his precious mitre, whilst Willson’s ring was a gift from his wife. He also paid for the furnishing and decoration of the Blessed Sacrament Chapel in Pugin’s St Barnabas’ Church (later Cathedral), Nottingham, the most lavish and expensive part of the building, again through his love and respect for Willson. And when Willson was nominated by the Holy See as the first Bishop of Hobart Town in early 1842, he even wrote an impassioned plea to Rome for Willson to be spared the appointment so as to be able to continue his remarkable labours in Nottingham.