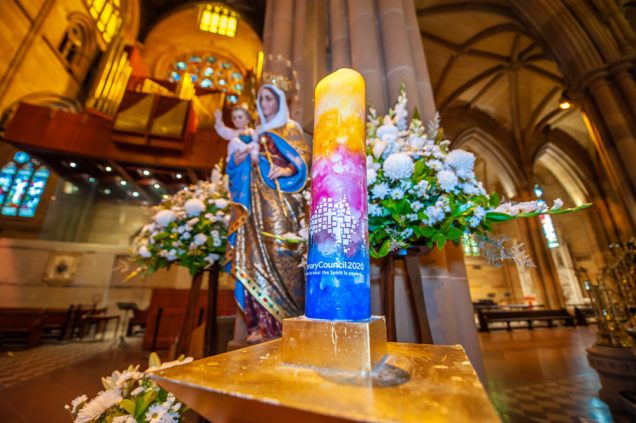 The First General Assembly of the Fifth Plenary Council of Australia concluded on 10 October after a week of intense prayer, reflection, and discussion on a vast array of topics regarding the life and mission of the Catholic Church in Australia.

More than 300 participants took part in the Assembly from 3 to 10 October including bishops, clergy, religious and lay men and women from around the country, in what was perhaps the first meeting of a plenary council to take place almost entirely online due to Covid-19 restrictions.

The 278 Council Members and other invited guests met online each day to pray together, listen to interventions, and discuss diverse topics in small groups of up to 30 people. Discussions sought to address the key question of the Council – What is God asking of the Church in Australia at this time?

There was a particular focus by the organisers on aboriginal reconciliation in the audio visual presentations and during the general plenary sessions delegates raised a range of issues, from the role of women in the Church, to the need to better support marriage and family life.

Reflecting on the week, Archbishop Julian spoke of the “goodwill” of all participants in the Council and said “much good” had been achieved. When it came to the pivotal question of the Church’s mission however, the Archbishop said he felt not enough attention had been paid to the primary mission of the Church which is evangelisation, and to the urgent need to address the crisis of faith in Australia.

“I felt there was something lacking, maybe a lack of attention to the spiritual purposes of the Church,” Archbishop Julian said.

“The spiritual mission of the Church has got to be foremost, the call to bring people to a life in Christ and ultimately find a path to eternal life.”

In a final statement at the close of the week, Plenary Council Members said it had been at time of prayer and listening to a variety of voices.

“Each of these voices has been a powerful reminder that the Church, as a sign of the kingdom of God, has the vocation of being an image of Christ and an icon of grace to the whole human family.”

The Plenary Council will now enter a time of “prayer, reflection, maturation and development,” involving the wider Church community, as propositions are developed for presentation at the Second Assembly scheduled to take place in Sydney in July next year. At the Second Assembly the bishops will have a deliberative vote to enact legislation.

In his address to close the First Assembly, Plenary Council President, Archbishop Timothy Costelloe SDB, recalled Pope Francis’ desire for the Church to adopt a “missionary option” suitable for evangelisation in today’s world.

“Many times this week we have been reminded that the Church does not exist for its own sake but rather exists to help bring about the Kingdom of God.”

Archbishop Costelloe encouraged the faithful to be hopeful as the Council process moves ahead.

“The Lord Jesus is always with us; he remains faithful and true; and he says to us as he said to his first disciples: take courage, I am with you, do not be afraid.”

For more information about the Fifth Plenary Council of Australia visit plenarycouncil.catholic.org.au/