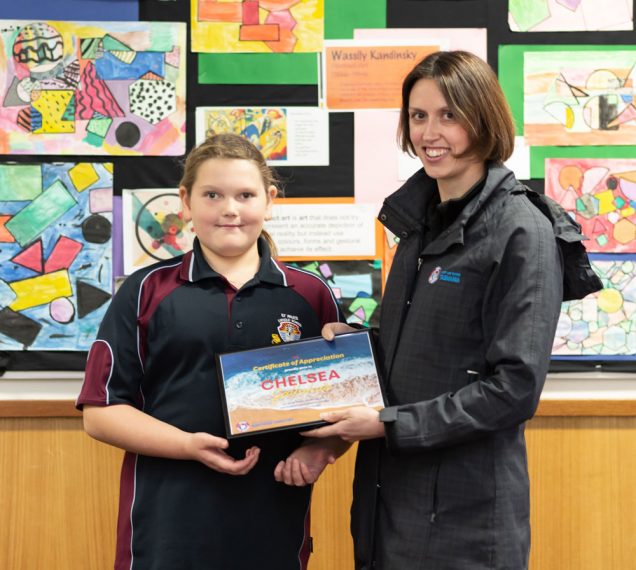 A quick-thinking student from St Paul’s Catholic School at Bridgewater has been recognised for her bravery.

The cool head and speedy actions of Chelsea Gallahar, then aged nine, helped to save the life of an adult at a wave pool in Darwin.

Grade four student Chelsea, an accomplished swimmer, was on holiday in the Northern Territory with her family when the incident took place.

Chelsea explained: “We were at the wave pool and I was swimming where the waves first started, and the lifeguard was telling this man to move away from the lane rope.

“He was in [an inflatable ‘donut’] … and it got stuck underneath the lane rope.”

Realising the man was in difficulty, Chelsea calmly gave the man her own flotation device to support him until the lifeguard arrived.

That incident had its sequel at Chelsea’s school last month when Surf Life Saving Tasmania (SLST) presented Chelsea with a bravery award on behalf of Northern Territory SLST.

Proud dad Krystyne Gallahar said Chelsea started learning to swim when she was four and time at the pool was the highlight of her week. It also underlined the importance of water safety week, held once a term at her swim school.

“[It’s] great [for Chelsea] to be recognised for her efforts,” he added.

“Chelsea was with her family in Darwin, in a pool and … an adult was drowning and she was extremely calm and collected and used a boogie board to support him and got the attention of the life guard and saved his life,” Mrs Baker said.

“And she has come back to school and not said one word about it.

“She’s an excellent swimmer. I would call water her natural habitat. She is so comfortable in water, she can do anything.”

Royal Life Saving Australia’s national drowning report 2021 reveals that 294 people drowned in Australian waterways to June 30 this year, up 20 percent on the previous year, with males accounting for 80 percent of all drownings. Sadly, seven people drowned in Tasmanian waters and five in the Northern Territory in this period.