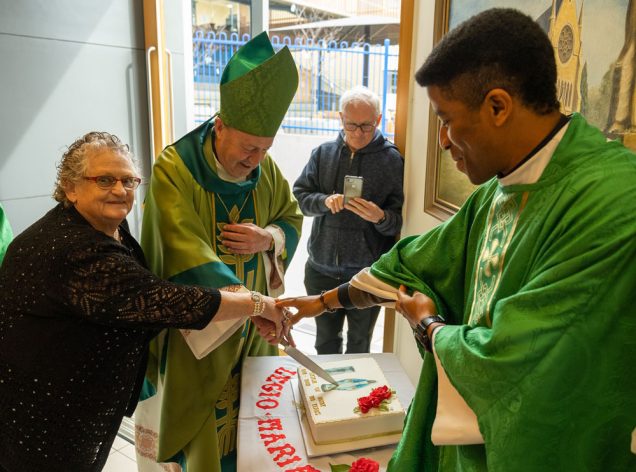 The Legion of Mary is a lay movement which has contributed richly to the spiritual life of millions of its members and fostered innumerable good works in the Church over the past centenary, according to Archbishop Julian.

He was celebrating Mass at St Mary’s Cathedral, Hobart, on Sunday, 29 August, to mark the Legion of Mary’s centenary celebrations

The Archbishop explained that the Legion of Mary was established in Ireland in 1921 as a spiritual and apostolic society for women. It started in Tasmania in 1934 and there are now four parish-based branches – at Ulverstone, Kingston, Bridgewater and Glenorchy. Legionaries assist priests in apostolic activities, visit families and those in need, and meet weekly for prayer, report on apostolic works and discussion.

“The legion encourages the spiritual growth of its members with a special emphasis on devotion to Mary, the Mother of God, in the spirit of the writings of St Louis de Montfort,” His Grace said.

“Without a strong spiritual inspiration, apostolic works can become mere activism. This spirituality ensures that the legionaries have a spiritual orientation in their apostolate. They seek to bring people to faith in Christ and participate in the life of the local parish.”

The centenary Mass went ‘beautifully’, according to Helen Emery, the Legion of Mary secretary for the Hobart Curia.

“A highlight was the homily given by His Grace, all about the legion and its work,” Mrs Emery said.

“He spoke of the works of Frank Duff, the founder, who wrote a booklet when 23 [entitled] “Can we be saints”?

“The message of the legion is ‘to Jesus through Mary’.”

Mrs Emery added that about 70 people attending a celebratory morning tea after Mass, where Archbishop Julian cut the anniversary cake.

Legionaries are now looking forward to the next milestone: the celebration of 90 years of the legion in Tasmania in 2024.