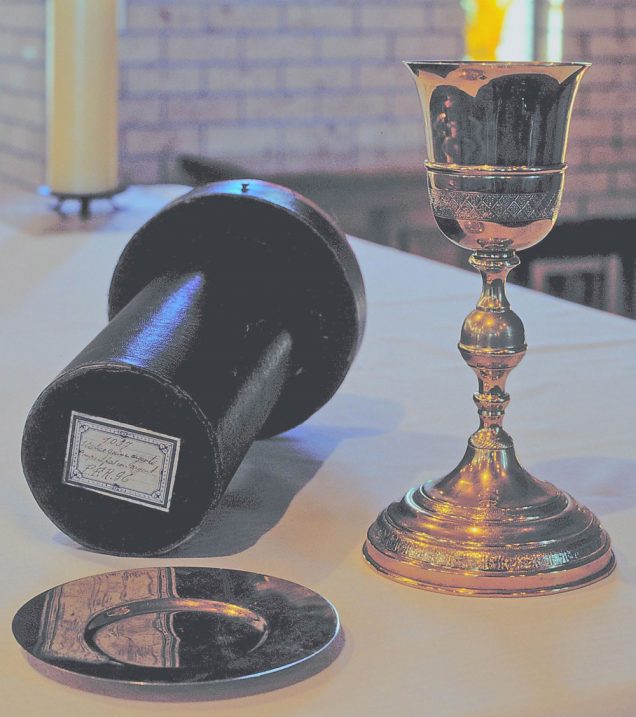 Liturgical vessels of French manufacture dating from the late nineteenth and early twentieth centuries, such as chalices, ciboria and monstrances, are relatively common in Tasmanian churches, doubtless because of the sales acumen of the Lyon firm of Louis Gille et Cie. The company established export outlets in Sydney and Melbourne, advertising in the Australasian Catholic Directory as early as 1900, a sure-fire way of bringing its wares to the attention of the Australian clergy. This was complemented around 1905 by a 428-page fully-indexed illustrated catalogue of its products, including simple instructions for ordering. No wonder the firm had such success!

Regarding Gille’s chalices, the efflux of time and the impact of liturgical changes in the aftermath of the Second Vatican Council have resulted in the original accompanying patens (the little circular plate for the consecrated Host at Mass) being replaced by larger ones. A consequence of this has been that the original cases holding both chalice and paten no longer fitted and have been mostly discarded. Happily, a complete set consisting of chalice, paten and case has survived, purchased for St Patrick’s Church, Forest, in the north-west c.1911 and transferred to Smithton following the church’s closure.

In a simple Classical style, the chalice was advertised in the c.1905 Gille catalogue as a new product: ‘The Best Value Ever Offered in Australia. No. 1097.- SILVER CHALICE, Entirely Gilt’. The price, with paten and cardboard case, was £4  4  0 ($8.80). Although advertised as made of silver, this description was not strictly correct. Hallmarks on the chalice bowl and the paten reveal that they were manufactured from 800 parts per 1000 silver, the lower of two grades of French silver, whereas the body of the chalice was made from electroplated base metal, probably brass. This was by no means uncommon for ecclesiastical metalwork which was not of the highest quality and price. Again, the description of the silver quality in the advertisement as ‘Sterling Silver’ was a bit of promotional sleight-of-hand. ‘Sterling silver’ is in fact the English legal standard denoting a guaranteed silver purity of 920 parts per thousand. In the minds of potential purchasers, the term would presumably have been associated with quality, hence its misuse.