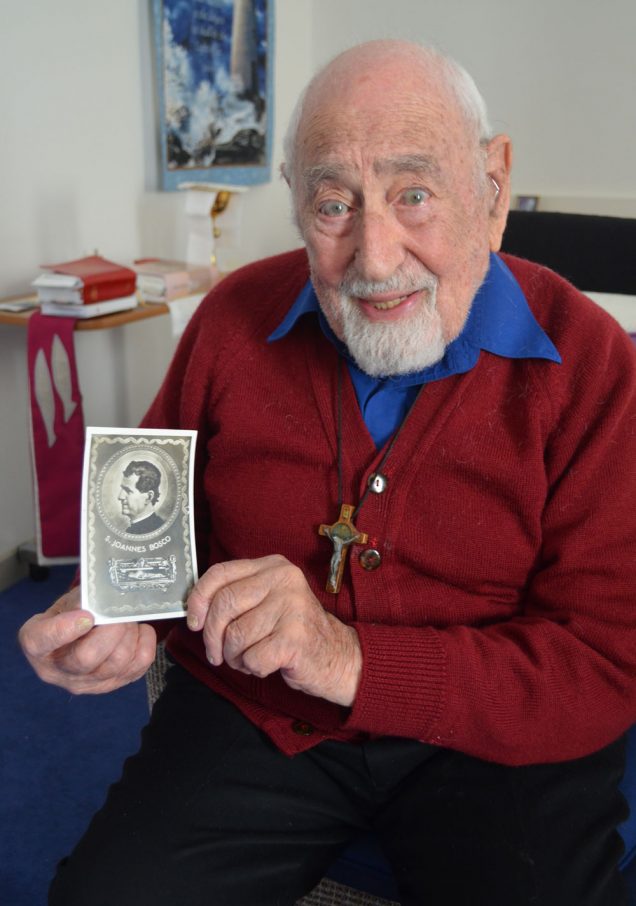 Fr Bob Curmi SDB, who has served the Glenorchy community for more than half of his priestly ministry, has marked the 65th anniversary of his ordination.

The Maltese-born priest and retired teacher celebrated the occasion with the Glenorchy Salesian community, where he was the main celebrant and preacher at the Eucharist, followed by a festive meal.

Fr Bob, 93, now living in a New Town nursing home, was in a reflective mood, looking back over his long and eventful life.

Robert Curmi was born into a Catholic family in December 1927, the second of 13 children.

A young Bob would accompany his mother to Mass twice a week. His decision to become a Salesian priest was influenced by a visit of the relics of the order’s founder, St John Bosco (Don Bosco), to Malta in the 1930s; reading a book on Don Bosco’s life; and support and encouragement from Salesian community members in Malta.

“During air raids in World War II, our school was bombed. The Salesians had underground dorms and they gave us a dormitory to use as a classroom. We would meet the brothers who were teaching the orphans there,” he recalled.

At age 15, Fr Bob pledged to his dying grandfather that he would become a priest. At 17, he left Malta to live at a Salesian college in Battersea, London, and then at 18, he moved to Australia where an uncle was Malta’s High Commissioner. Br Bob, as he was then, began studying teacher training and philosophy at the Salesian college at Sunbury, Victoria.

He first served in Glenorchy from 1950 to ’52, getting teaching experience at the Salesian-run Boys’ Town. He then moved to Italy to complete his seminary studies, and was ordained at the Basilica of Mary Help of Christians at Valdocco, Turin, on 1 July, 1956.

After various teaching and administration roles in Australia and Samoa, Fr Bob returned to Glenorchy in 1985 to teach at Dominic College through the week and carry out parish duties at weekends. His main subjects were art and religion but he also taught English, physical education and gymnastics. Over the years he also assisted in the college’s workshop, chaplaincy, and gardens and was even a cheerful junior school crossing guard for a time.

He celebrated a monthly Mass at Risdon prison and for 30 years he was spiritual director to the Legion of Mary, a role that brought him great joy.

“[Growing up in Malta,] I was not allowed to be an active member of Legion of Mary youth group,” he said.

“I never had an active Legion of Mary group until I came to Tasmania. My dream has come true here [and] they are very good and very faithful. I still say the Legion of Mary prayer at the end of every day. I know it in three languages: Italian, Maltese and English.”

Fr Bob Curmi is regarded as a humble, thoughtful and devout man of prayer who has lived a life in loving service to the students of Dominic College and the wider Catholic community in Glenorchy, in the tradition of St John Bosco.