The history behind our places of worship 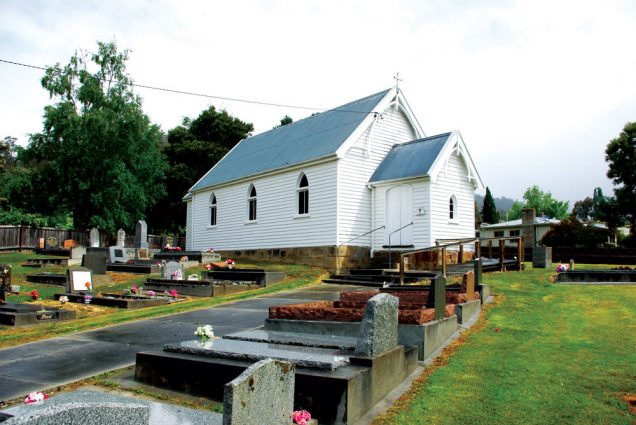 Ellendale is named after Ellen Brown, the wife of Nicholas John Brown, a prominent pastoralist and member of parliament.

St Colman’s has a direct link with Brown who in 1888 donated land to build a Catholic church. A notable feature of the establishment of St Colman’s was the support the Catholic community received from all of Ellendale’s religious community, in an era when sectarianism was the norm.

By the early 1880s Ellendale had a small number of Catholic families who were served by visiting priests from New Norfolk. In 1888 the Hobart Mercury reported: “For several months past the Catholics of the district, headed by their respected pastor the Rev Fr T. M. O’Callaghan, have been exerting themselves to procure a suitable place of worship.

In this laudable effort they have been aided by the members of other denominations. Most pleasing is it to be able to narrate the harmony and good feeling that exists between the Catholics and Protestants of the locality.”

Even with the gift of land, the task of raising funds to build the church was challenging. The Tasmanian News records:

“The Catholics of Ellendale, who are not very numerous or very wealthy, hope their more fortunate friends and neighbours will come to their assistance.”

This hope was realised in a fundraising event held in July 1889: “An entertainment and concert had been organised by Rev Fr T. M. O’Callaghan, … the local State schoolroom was kindly loaned for the occasion, and into a seething mass of humanity pushed its way soon after 7 o’ clock p.m.. The good priest himself presided.

The foundation stone for a weatherboard church, built by James Dunn, ‘a native of the district’, was laid on Monday, 11 November, 1889. One year later St Colman’s was opened and blessed by Archbishop Murphy. The Hobart Mercury records: “On Monday Ellendale was en fete, the people from the district around flocking to the township, comprising not only Catholics, but people belonging to all denominations. A contingent of clergy from Hobart arrived at 12 o’clock, … the Archbishop congratulated the people of Ellendale on the beautiful church they had erected in their midst, and expressed his thankfulness at the generosity shown by people of all denominations in that locality in assisting in the good work…”

St Colman’s celebrated its 130th anniversary in 2020. The attractive Gothic-style church is a jewel at the centre of a beautiful town and also a monument to the ‘harmony and good feeling’ of a tight-knit community.