St John Chrysostom, bishop and doctor of the Church 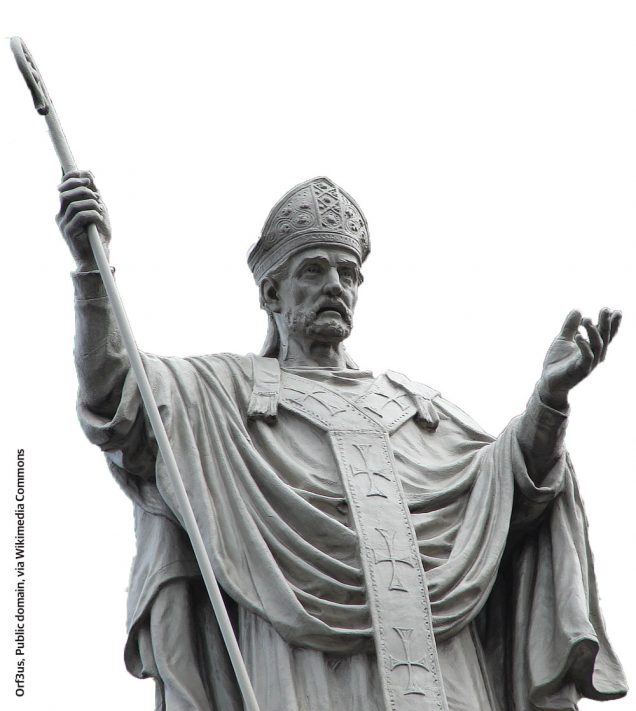 Owing to the date of St John Chrysostom’s death coinciding with the feast of the Exaltation of the Holy Cross, in the General Roman Calendar since 1970 he is celebrated on the previous day.

In spite of his protests, St John Chrysostom was in 397AD elected Patriarch of the greatest and most powerful church of his time, the Church of Constantinople. His cathedral, the magnificent Hagia Sophia, was attended not only by the diverse inhabitants of the city, but also by the Byzantine emperor and his court.

Chrysostom is said to have exemplified the role of the prophet: to comfort the afflicted and to afflict the comfortable. Unimpressed by celebrity or wealth, he used his pulpit to repeatedly call for the transformation of society, denouncing abuse of authority by both ecclesiastical and political leaders. He exhorted the wealthy citizens to aid the poor, and all Christians to remain faithful to the Lord in whom they had been saved. Needless to say, he had his share of fans and detractors. His preaching captivated, perplexed and even offended the Church of Constantinople.

Indeed, his extraordinary preaching earned him the Greek name Chrysostomos, which translates as golden mouth. The saint’s insight, eloquence, fluency of languages, piety and spiritual courage see him ranked among the greatest fathers of the church. His 700-plus sermons and 246 letters, biblical commentaries, moral discourses, and theological treatises have done much to explain the Catholic faith and encourage the living of the Christian way of life.

His influence on church teachings is evidenced in its prevalence throughout the Catechism of the Catholic Church which cites him in 18 sections, particularly his reflections on the purpose of prayer and the meaning of the Lord’s Prayer.

Through his authentic and bold witness to Jesus Christ we are confronted with the reality that such witness may cost us dearly. Certainly Chrysostom’s courage and honesty came at the price of a turbulent ministry as bishop, personal vilification, and ultimately his exile.

St John Chrysostom is represented in art by bees, a dove, a pen and inkhorn. Chrysostom said that the bee is more honored than other animals, not because she labors, but because she labors for others. He is acknowledged as patron saint of Constantinople, education, epilepsy, lecturers, orators and those who preach.