Renewal of promises for permanent deacons 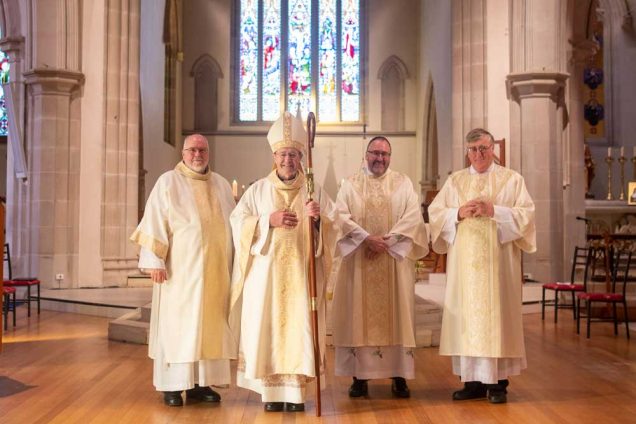 Tasmania’s permanent deacons have renewed their promises at a Diaconate Mass in Hobart, reaffirming their commitment to their vocation.

Deacon Nick MacFarlane, Deacon Michael Hangan and Deacon Michael Smith renewed the promises they made at their ordination to the diaconate at St Mary’s Cathedral on 5 June in honour of St Ephrem.

“St Ephrem was a deacon and one of the few saints recognised as a doctor of the church, so his example is very fitting,” Dcn Nick said.

“As deacons, we recommit to our promises on a daily basis, but this mass is a significant way for us to publicly and formally re-centre ourselves on these promises that we have devoted our lives to.”

Dcn Nick said the mass, which also falls around the anniversary of ordination for each Deacon, offered parishioners an important opportunity to pray for the ministry.

“As we affirm our commitment, it is a way for the people to affirm us and sustain us with their prayers,” he said.

In celebrating the mass, Archbishop Julian said the restoration of the Diaconate as a permanent order in the Church was an important decision made by the Fathers at the Second Vatican Council.

“In the Archdiocese, though the numbers are small, the presence of permanent deacons attests to the tradition of the Church,” he said.

Dcn Nick said the Diaconate was one of the ways the Holy Spirit helped the church respond to the need for renewal.

“It is part of the Lord’s answer to re-energise and meet particular challenges,” he said.

“Deacons are a way the Church can energise lay people in bringing the mission of the Church to the world. They are a part of the mystical Body of Christ, with many different parts doing many different things.”

With three permanent deacons in the Archdiocese of Hobart, Dcn Nick said there was a great need for more men to answer the call to the vocation.

“I do whatever I can to encourage others to pray for vocation and consider men who might choose this path for themselves,” he said.

“The Diaconate Mass is another way of publicising it and encouraging people to think about it.”