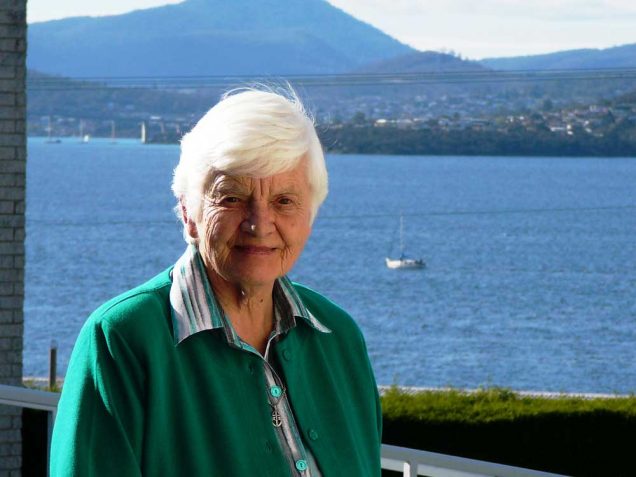 Sr Mary Noonan has been remembered as ‘a most loveable, big-hearted, audacious, Josephite woman of faith’.

The Victoria-Tasmania regional leader for the Sisters of St Joseph, Sr Sue McGuinness, paid tribute to Sr Mary’s ‘generous life’ as a Josephite which encompassed roles as a gifted teacher, pastoral carer and missionary, in a message relayed at her funeral at Sacred Heart Church, New Town.

After gaining a Bachelor of Arts and Diploma of Education from the University of Tasmania, Sr Mary taught thousands of students, including Emeritus Archbishop Adrian Doyle, at Catholic schools at New Town, Devonport, Launceston and Cygnet.

She spent eight years in parish ministry at Campbell Town.

Sr Mary gained a theology degree in later life, and after a stint in the Circular Head parish, she became a lecturer in a seminary in Papua New Guinea. She later described these eight years from 1996 as the happiest of her life as a nun.

On her return to Tasmania, Sr Mary wrote with humour and flair her autobiography, Nun the Less, and a second book, Nun the Wiser, about the Pope’s visit to Sydney in 2008, both of which were sold in aid of an educational fund for children in Papua New Guinea.

Sr Carmel Jones, of Launceston, a former student, recalled Sr Mary as an inspiring, lively and creative person who not only taught with skill across all subjects but also encouraged her students in singing, verse speaking, plays, musicals concerts, eisteddfods and competitions. Sr Mary appeared with three students on national TV talent show Showcase in 1969, and later organised a performance of Sister Act while based in the Circular Head parish.

During the eulogy address, Sr Carmel said: “She loved music and singing, and watching films – and swimming. And she loved her family, her siblings and her extended family. She was proud of their achievements and valued the time she spent with them.

“As a Sister of St Joseph, she certainly took Mary MacKillop at her word: ‘Never see a need without doing something about it’…

“Let’s rejoice that we have known this wonderful woman who has shown us a face of God we would not otherwise have known. Mary had a deep relationship with her God and that gave her the inner strength she needed to live each day to the full.”

Sr Mary died peacefully at Guilford Young Grove aged care facility in Sandy Bay. Emeritus Archbishop Doyle was the principal celebrant at her funeral on June 2, which was followed by interment at Cornelian Bay Cemetery.